The End of the Middle Ages 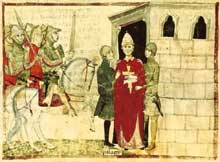 The Middle Ages and Renaissance are great sources of material for Fantasy writing (and inspiration for other genres).

G.R.R. Martin apparently used material on The War of the Roses as his "inspiration" for the civil war in his books. The War of the Roses began in 1455, well into that "pagan" period. Many historians give the fall of Constantinople as the end of the Middle ages in 1453. I myself prefer the reasoning of Atila Sinke Guimarães, who puts the end of the Middle Ages (or, at the very least, the beginning of the end) at 8 September 1303 a.D.

That day, in the town of Anagni, about forty miles south of Rome, William of Nogaret, councillor and keeper of the seal to King Philip IV of France abducted Pope Boniface VIII. Nogaret had been sent to Italy with the task of kidnapping the Pope and bringing him to France for a show trial to be followed by deposition. Nogaret gathered together a band of some 1,600 rogues and political enemies of the Gaetani family (Boniface VIII's family) and suddenly attacked the town, looted the castle, and took the pope captive. After two days of humiliation and threats, the people of Anagni rose up and expelled Nogaret and his men. The pope died in Rome a month later, however.

This event is significant because it was a terrible blow against supremacy of the Papacy over the temporal monarchs, which was one of the great characteristics of the Middle Ages. That supremacy was important for many reasons, but thinking back again to the discussion of A Game of Thrones, in the real world when nobles behaved even half as badly as Martin's nobles, they would be excommunicated (if they didn't meet another bad end). The role of the Church in the Middle Ages did a great deal to rein-in those few lords who might abuse their powers -- contrasted with the Renaissance where the Church was less powerful (especially after the Protestant Revolt).
Posted by Swords and Space at 10:19