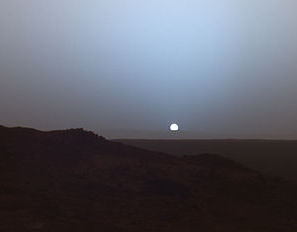 By Godfrey Blackwell
The crucifix at the end of his father’s rosary swung back and forth ever so slowly as he worked the beads. Though he prayed the Paters and Aves without sound, his lips moved and Marcus could have followed the familiar words as they took shape there. But Marcus kept his gaze fixed on the cross with the tiny corpus of the crucified Lord swinging back and forth, back and forth.

The habitation module was quiet, though the low background of the air circulation and the hum of the generators was always there. Every so often, above this, there would come a moan from down the short hall which led to the four bedrooms. A small, cracked voice, so quiet he could barely make it out, called for Portia. This caused Marcus to look up to his father’s face. Dad’s eyes were shut, but they seemed to squeeze a little tighter at the name.

Portia had been buried a week ago, out beyond the last airlock, in the funeral caves carved into the inner wall of Valles Marineris. She slept among the dead now after a long wasting sickness. After she was gone, mom and Valentina started the same way. Marcus was so tired. He closed his eyes and wished for the nightmare to end, and that he could have rest.

The boy opened his eyes. Dad stood up, and put the rosary over his head, letting it fall inside his spacesuit with the crucifix over his chest.

“Get your helmet on. We can’t delay this any more … it’s getting late.”

They put their helmets and gloves on, but left their helmets open. Dad grabbed a tool bag. From within, the hammer and metal spikes clanked against the drill. They moved out through the lock and into the maze of tunnels hewn from the Martian rock. Once through the warrens of their habitation section, they came to the high-roofed cavern cut by lava flow before history, before even the thing that haunted the colony now.

Past rows of plants and crops that helped produce atmosphere as well as food they moved, drawing ever closer to their dreaded task. To walk through the cavern, one would have thought nothing was amiss in the colony. Miners trundled home on rolligans, trucks with goods passed-to-and-fro, and pedestrian traffic moved along the sidewalks. The ground took on a slight incline as they neared the end of the lava tube and the last lock that led out into Valles Marineris itself. They passed through the lock and out into the valley.

Marcus looked up. The sun was already obscured by the steep canyon wall to the west, casting the valley in shadow. The sky was still pinkish-red and had not yet given way to the blue of the Martian sunset. He shivered inside his suit, thinking of the rapping at his door the night before, and the whisper … the whisper, terrible and beautiful, and unmistakably Portia’s.

He pushed the thought away and focussed on his dad’s back, with a large air tank on it, as the big man trudged through the regolith and the swirling patterns of dust in the frigid air that whipped about them. He took comfort in knowing that Dad knew what to do. As awful as it might be … his dad wasn’t like other fathers who understood only their drill work or crop fertilizers and the 20-minute delayed sports ball transmissions from earth. His dad knew about Faith, and quietly taught them about it after their mandatory classes at school, and he understood that just because the medicos couldn't explain it that it couldn't be explained at all. In a word, Dad wasn’t stupid like so many other adults were. That was why he followed, and knew what they were doing was right — not just because the man ahead was his father.

The burial catacombs, in a cave across from the colonial lava tube, were close at hand now, and Marcus could feel badness oozing from the dark opening. He stopped and found he couldn’t move his feet. A message flashed on the faceplate of his helmet warning that his heart rate and respiration were up. There was another voice at the back of his head screaming danger! at him.

His father stopped and turned. “I know, Marcus. I can feel it too.”

He came back and took Marcus by the hand and squeezed hard so that he could feel it through the suit.

Marcus knew the creatures — the vampires — that had taken his sister, would get the whole colony. In an age of interplanetary travel such an old superstition was beyond lunacy to “respectable”, “sane” people. Marcus stared at the cave entrance, so black it was like a hole punched right into the universe. It seemed to suck the last of the sun’s weakening light into itself. That gaping maw was hideous.

“Hail Mary, full of grace,” his father began the prayer, and stepped forward. Marcus found he had the strength to lift his feet despite their weight.

Inside the catacomb, they activated their helmet lamps. Despite the bright white LED lights, the darkness pressed in on them. Thought it was impossible, Marcus swore he could smell the sickly-sweet odour of decay. They moved past the mummified remains of colonists on their tiered pallets in the walls. They reached the spot where Portia had been placed. He couldn’t look. Images flashed on his inner eyelids of terrible possibilities.

“What?” Now Marcus did look, and he saw that the niche that had been carved for his sister was, indeed, empty.

“She must have moved, to make it harder for us to find her.” Dad crossed himself and looked around wildly. Through the faceplate Marcus could see his lunatic glances and knew that the strong man he looked up to, who had fought in the Void War before he was born, was as near to breaking as he was. Yet Marcus couldn’t help himself from saying,

Instead of unnerving his father, this seemed to fortify him. His eyes softened, and he squeezed Marcus’ hand again. After several loud breaths that made Shhh-shhhh sounds over the radio, Dad nodded to himself.

“She’s here somewhere. I — we — can feel it. There aren’t many places in here. We just have to keep our wits, and our courage … and look. Remember, Marcus, there’s no courage without fear. Let’s do this.”

They quietly prayed the rosary as they went. Marcus tried to ignore the bluish tinge to the ever dimming light coming from the cave entrance. They did not rush, however, and down a new spur that had been cut for future graves, the darkness seemed to deepen and Marcus’s helmet filled with a rank, rotten odour. And then they found her. A whoosh filled Marcus’ ears as Dad took a shuddering breath.

Portia lay tucked under a shelf of dark rock, spotlighted by their headlamps. She wore a simple colony coverall, but bore none of the signs of exposure to the arid frigidness of the Martian air, to say nothing of death. She had been a pretty girl of fifteen, and Marcus guessed she’d probably be considered beautiful by other boys by the time she reached 18. But now, she radiated a gorgeousness that was terrifying in its darkness. Her cheeks were ruddy and her lips a deep and glowing red. Yet despite the colour she seemed so cold; but not from the thin Martian air. The coldness seemed to radiate from within.

Dad moved forward and with great gentleness, cradled his arms beneath her and pulled her out from the little alcove under the rock.

“Dad, I don’t think she’s dead,” Marcus whispered. Then shook his head at the stupidity of that. Nothing could survive out here. He glanced at his wrist readout without thinking — it was already minus thirty Celsius.

“No, she’s worse than dead,” Dad said. He reached into his bag and pulled out the crucifix from their dining room wall and handed it to him. “Hold this.”

He then pulled out the hammer and spike. “Miserere mei Deus: secundum magnam —”

Dad did freeze mid-motion as he was moving the spike into place. Marcus slowly turned and saw two suited figures hurrying down the rough-cut shaft, lights from helmets and drawn pistols cutting white lances through the darkness. As they drew near enough for Marcus’ head lamps to illuminate them, he saw SHERIFF stencilled above their visors.

“Schaefer you really have lost it, haven’t you?” One of the security men said.

“Jiangshi? Vampires? That’s superstitious nonsense, how can you expect me to believe that?”

“Look at her!” Marcus blurted.

Marcus looked past the sheriff and his deputy. There wasn’t even a hint of bluish light from down the corridor. He glanced down at his wrist panel. 1830 … what time was sunset? 1832? 31? Movement caught the corner of his eye and he whipped his body around to see his father swinging the hammer.

Even in the thin Martian air and muffled by his helmet, the gunshot was reverberated loudly. Dad jerked and fell sideways, grasping his side. Before Marcus could react, Portia’s eyelids flew open and with impossible speed, she was on her feet. The dark beauty of a moment ago was gone; her face was a pallid circle split by a slavering open jaw with impossibly long incisors. Her eyes were like black holes punched in the fabric of space.

Neither Sheriff Teng nor his deputy were able to get a shot off as they stared in gape-mouthed horror as she rushed them. With impossible strength, she sent them both flying back down the corridor where they pinballed off the walls, into each other, and finally down to the rocky floor. The thing that had once been Portia loped down upon them, almost dog-like, and Marcus looked away. He ran to his father who was clutching his side, but slumped and dazed looking through his visor. Marcus pulled the emergency repair kit out of his calf pouch and slapped a quick drying resin patch onto the hole. It wouldn’t fix the wound but would at least prevent hypoxia. Just as Marcus picked up the crucifix again, he was grabbed by a vice-like flip and swung around.

Portia had grabbed him. Her eyes were as deep and black as black holes, shot with red. Marcus felt as if he were falling into the irresistible gravitational field of an actual black hole. Only it was his soul that was being sucked down there, not his body. And he knew that if he went there he’d never get out. He wrenched his eyes away and brought the crucifix up. With an ululating scream the vampire fell backwards and Marcus stumbled and fell to a knee. He held out the cross, now transfixing the not-Portia thing.

His dad struggled to his feet, grabbed the hammer and spike and rushed in.
“Miserere mei, Deus: secundum magnam misericordiam tuam.”
Posted by Godfrey Blackwell at 06:00