Hygiene in the Middle Ages 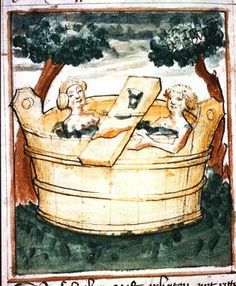 We do a lot of research here at Swords and Space for homeschooling and also seeking inspiration for stories. Although Dad is personally happy to have left his school days far behind, he does still find it fascinating and enjoyable to revisit the Middle Ages and other historical periods. We thought it worthwhile to share some of that research occasionally.

One myth that seems to persist about the Middle Ages is the claim that mediæval people did not bathe. On the contrary, they not only washed, but they placed a high value on hygiene, and bathing was quite common. The "once a year bath whether you need it or not" canard was foreign to mediæval sensibilities. If such an attitude ever existed, it did in a period I am not familiar with.

Pulling out my old notes, I must make reference to one of my favourite books from universty: The Ties that Bound: Peasant Families in Medieval England by Barbara A. Hanawalt. The author is a liberal university professor, but an honest one at least, who did painstaking research to try to recreate certain aspects of mediæval peasant life. She researched her book by examining coroners' inquests in 14th and 15th century England. In total, she surveyed 3, 118 sudden death inquests.[i]

Of that sample, 35 (just over 1%) cases involved people whose baths ended in drowning. These ranged from bathing in a stream where the current was stronger than the bather believed, to where the unfortunate person slipped and hit their head.[ii] There was also clear evidence that bathing was common even in winter, including a case where an infant died when it was scalded after the tripod broke on a cauldron of bath water that was heating over the fire.[iii]

On top of all this, she found 12 cases where people died while washing laundry. Given that bathing and doing the laundry are hardly dangerous activities, one has no choice but to conclude that people bathed and washed their clothes frequently if this many people died due to fluke accidents while washing.

Beyond Dr. Hanawalt's specific work, there is abundant evidence that soap was very common in the Middle Ages. There are also numerous references in the literature of the time to bathing, wherein it is treated as something commonplace.[iv]

According to 13th century etiquette manuals, mediæval people were expected to always wash their hands before and after meals. Monastic rules included regulations ordaining regular bathing.[v] In the courts of the nobility, there were formal ceremonies that were scrupulously observed in this regard. Many people today don't wash their hands before and after meals. Perfume was also popular, and for the same reasons as today, not to mask bad hygiene as common "wisdom" would have us believe. [vi]

Finally, there is the related myth about Mediæval peoples' dental hygiene: that it was very bad and they had only blackened stumps for teeth. However, when one studies documents written during those horrible "Dark Ages", one finds that there were liquids to whiten teeth, compounds for filling cavities, dentures made of human teeth or cow bone, and even surgical techniques for oral cancer and the repair of fractured jaws.[vii] Scientists who have studied the exhumed remains of mediæval peasants found that they in fact had better teeth than modern people, probably because of better diet. In fact, at one site, not one body buried in the graveyard had tooth decay.[viii]

The true mediæval attitude towards bathing and cleanliness can perhaps be summed up by a common saying from France at the time: "Venari, ludere, lavari, bibere; Hoc est vivere!" (To hunt, to play, to wash, to drink, - This is to live!)[ix]