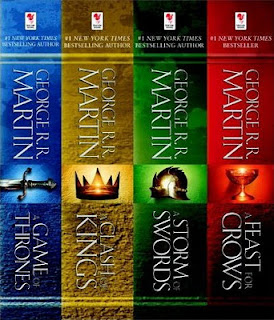 Title: George R. R. Martin's A Game of Thrones 4-Book Bundle
Authors: George R.R. Martin
Publisher: Bantam
Godfrey's Rating: 1 stars (out of 5)
Summary in a Sentence: A very well-written series of books that are enjoyable and engrossing then quickly descent into nihilistic soul-destroying garbage in an unending meandering tale with no plot advancement over thousands of pages.

Given the wild popularity of these novels and the HBO TV series they have inspired, it seemed almost mandatory for a blog focussed on science fiction and fantasy to review this work.

Mr. Martin has been dubbed the "American Tolkien" by Time magazine -- I cannot agree with this. The world he created for "A Song of Ice and Fire" is certainly very well thought-out and full of rich details, reminiscent of Tolkien's Middle Earth. However, he is no Tolkien, first and foremost because whereas Tolkien wrote inspiring tales of friendship and honour amidst evil and destruction, Mr. Martin weaves a depressing, dark, and uninspiring tale.

George Martin is, technically, a very skilled writer, and it is his skill that kept me reading and made me really want to enjoy these books the way so many do. He may actually approach Tolkien's mastery in terms of command of language. His style is quite dynamic and engages all of the senses making his writing in some ways more engaging than Tolkein's. It is his underlying message/theme that I cannot abide, coupled with some rather stupid ideas that make no sense if one knows anything about medieval societies, and the outright pornography in sections.

The novels take place, for the most part, the Seven Kingdoms of Westeros, which are, at the beginning of A Game of Thrones, united into single kingdom. It is an ancient kingdom with history stretching back some 12,000 years referenced in the story. The overarching plot is of a conflict between the leading families of the realm with House Lannister (the Queen of Westeros being of this house) playing the role of antagonists against the Starks of the North (the large family of Eddard Stark play a major role in the series). There is also a subplot concerning the exiled Targaryen heirs who seek to reclaim Westeros (the last Targaryen king having been overthrown about fifteen years before the start of A Game of Thrones). There are massive complexities within this broad plot involving familial alliances and age-old rivalries (quite well-done) which all explodes into a massive civil war.

One of the major aspects of the world Mr. Martin created is that it has seasons that last for years. I found it extremely difficult to suspend my disbelief on this score, since it would be impossible for people with mediæval technology to survive in northern climes where there are winters that last years and even a decade and more. Especially since there is reference to there being snow on the ground in summer in Winterfell. No satisfactory explanation is ever given in the novels as to how people stay fed in such an area -- although aside from this I found the world-building in these novels was well-done.

In addition to this, Mr. Martin populates his world with a large cast of characters who are for the most part believable and interesting. The problem I had with them is that they are, with very few exceptions who are all killed very early in the series, too "dark". That is, they are all completely out for themselves and here, again, the worldbuilding starts to fall apart a bit because a society with such universal disdain (not just disregard) for oaths and honour would not hold together. Certainly not in a feudal realm which Westeros is portrayed as. An assassination or an oath-breaking here-and-there is realistic and adds conflict to a story. The CONSTANT and unending oath-breaking, assassinations/regicides (more than one occurring at weddings that were ostensibly to form alliances), betrayals, the brutality of every character, the lack of decency, the complete narcissism and nihilism of every character who survives past the second novel, all proved too much for me. In the first two books this is not so bad as the few good and decent characters are still around. But as they are killed-off the work becomes uninspiring and depressing. At first I thought it was good writing -- giving the protagonists lots of conflict to overcome -- but ultimately it becomes clear that the overriding theme of "A Song of Ice and Fire" is complete nihilism, as summed up by a character called "The Hound":


... there are no true knights, no more than there are gods. If you can’t protect yourself, die and get out of the way of those who can. Sharp steel and strong arms rule this world, don’t ever believe any different.

Which is certainly not uplifting at all. It is social Darwinism/"survival of the fittest" writ large. It is, ultimately, soul-destroying uninspiring garbage. The technical writing itself is superb.  The many interesting plot elements and twists and turns, conbine for an enjoyable and addictive read. But this depressing and FALSE theme and theory cannot be countenanced. The real world is often ugly and there is evil in it, to be sure, but it is not THIS ugly -- J.R.R. Marin is beyond cynical in these books. Among humans there ARE true knights and heroes, and the IS a God. And no society has survived on a "survival of the fittest" mentality; it has rather been those societies that took duty seriously that rose to be great civilizations.

Just a couple examples from this series and how they're ridiculous when applied to real life. In one scene, we see a group of lords laughing to scorn a certain duke's "softness" because he allowed his peasants to take shelter inside his castle. This ignores the importance of serfs to a mediæval culture -- the main point of castles was to keep these valuable citizens safe. Martin never does try to explain how there isn't mass starvation across Westeros when the serfs are wantonly massacred and their own lords make no attempt whatsoever to protect them (and on the contrary tend to prey on their own serfs as much as the enemy). Then there's the marriage scene I referenced which angered me so much I stopped reading the novel for many weeks. It's preposterous that one would slay his new allies at the very wedding feast that is to seal the alliance. No one would ever join with that lord again and in reality in a feudal society which DEPENDS on the sacredness of oaths, such a man would be spurned by all.

Returning to the technical aspects, though the pacing was spot-on through the first two installments, I found that by book 3 (A Storm of Swords) the plot started to seriously drag and the overarching plot no longer advanced. It felt like the work started merely treading water and I wondered if Mr. Martin had any clear idea of how this civil war was supposed to end. He may not, given his inability to complete the series. Also, while unexpected twists are good,  Mr. Martin went too far in some instances. At one point he managed to wipe out, over the course of a chapter, almost all of the protagonists  and any realistic hope that whom I had identified as the "good guys" could win the war. I think this is a legitimate complaint, because it is not proper (in my humble opinion) for an author to  imply a certain group are the protagonists and then remove them from the work entirely. It is denying the reader delivery on an implicit promise.

This is NOT a work I would recommend to anyone. At best, it might be worth spending $15 on the Kindle version solely for the purpose of studying the technical writing/style of a talented author. Sadly, Mr. Martin uses his God-given talents to cynically promote a worldview of extreme nihilism.
Posted by Godfrey Blackwell at 06:00