The U.S.S. Cygnus and "The Black Hole" 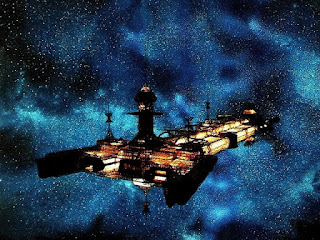 I mentioned the U.S.S. Cygnus in my post "5 Most Ridiculous Spacecraft in Film" and feel it deserves a special post of its own, along with some ruminations about the film Black Hole, in which it appears. Having acknowledged that it is, from a hard science fiction point of view, an absurd vessel, I reiterate my comment that the Cygnus is a darkly gorgeous, truly awesome spectacle of a star ship and one of my favourite space vessels ever in film.

It has a certain gothic feel to it, almost like a cathedral flying in space, yet with a touch of Victorian/Steampunk with all the glass and lights (in my view) . What makes it silly from a hard sci-fi point of view is what makes it so magnificent: it is not merely functional, but a work of art. Here area  few more pictures: 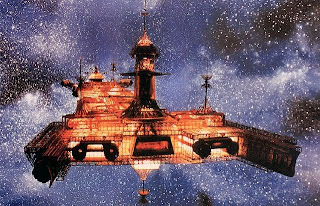 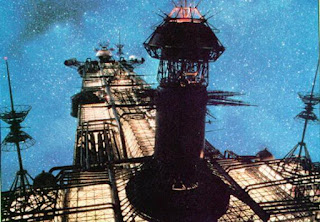 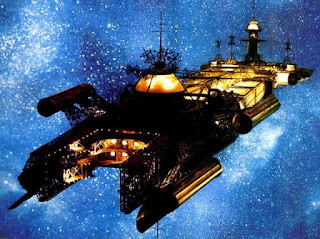 Considerations of taste aside, it's an impressive example of how much more real a model ship can look than the CGI contraptions modern audiences must endure. Although, it must be admitted, that reading about all the work involved in building/filming/maintaining the thing helps one understand why the CGI "easy way out" is invariably taken these days. From the Starship Modeler site:


Volume 9 No.3 of "Cinefantastique" magazine published when "The Black Hole" was released contains the best sources of information and pictures I have yet seen on the original models. There were two full models of the Cygnus built at a little over twelve feet long, with other sectional models built to a much larger scale for certain close up shots. The twelve foot miniatures weighed 170 pounds each and were constructed primarily of brass and completely made from scratch, with EMA tubes and domes used for detailing. Under this brass exoskeleton were sections of translucent plastic built in sections which housed about a hundred and fifty automotive light bulbs. The two models cost $100,000 and took a crew of 12 to 15 people approximately a year to build. One of the two models were completely destroyed filming the story's ending sequences. The other model went to the Museum of Modern Art in New York for a time after filming. It's fate since then remains a mystery.

"According to an ex-Disney employee, the model was stored in a crate in the 'Boneyard', where old props and such are stored on the Disney lot. It was rained on a great deal, and, one day, smashed to pieces by a poorly-driven forklift which accidentally backed into the crate. Pieces of the model were taken by various folks as souveniers."

Here's a shot of what the model looked like next to film crew: 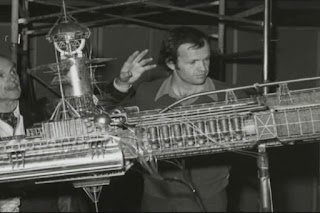 Without writing a full review of The Black Hole, it's worth mentioning that the film has generally been much maligned by critics and viewers over the years. I personally really enjoy it as a sort of sci-fi "spooky castle" film heavy with atmosphere. The big problem with it is that it attempts to be, at the same time, a kid's film with some comic elements which clash with the sense of foreboding that is steadily built up during the film and the darker aspects of the film (such as the horrible revelation that the entire crew was lobotomized and made into zombie slaves to Dr. Reinhardt). Still and all, a worthy film -- and certainly a very unique one.
Posted by Godfrey Blackwell at 09:41