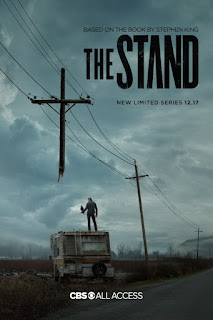 Title: The Stand (2020-2021 Ministeries)
Producer: ABC
Godfrey's Rating: 1 star
Starring: James Marsden, Owen Teague, Henry Zaga, Jovan Adepo
Summary in a Sentence: A modern take on Stephen King's classic apocalyptic/post apocalyptic novel about a superflu, that ends up being a disjointed mess of continuous flashbacks and characters recast as different genders and races ... because 2021?
Stephen King's novel, The Stand, has for some time been one of my favourite novels. It tells not just the story of the disintegration of society over the course of a "super flu" that wipes out 99% of the world's population in a matter of weeks, but also tells a compelling story of good versus evil as two groups of survivors coalesce around two powerful figures.
There was a solid made-for-TV miniseries produced in 1994 starring Gary Sinise and Rob Lowe which, notwithstanding the low production values of made-for-TV shows in that time period was very good, with excellent acting and remaining very true to not just the letter but the spirit of the novel. I had heard good things about the 2020 remake and it was with some excitement that I noticed it available for viewing on Amazon Prime.
I watched two episodes and then skimmed another two before finally giving up. The production value is great, and I think that re-situating the story in modern times (versus the late 80s/early 90s) was fitting and well-executed. Some of the acting/casting was very good ... I thought Gary Sinise could never be replaced as Stu Redman, but James Marsden actually pulled it off. The problem is the manner that the story is presented -- I suppose they did this to try to be "fresh" and "new" but decided to tell the story as a series of flashbacks that jump around between right before the super flu, to shortly after. The "current time" appears to be after all of the "good" people have gathered in Boulder Colorado. As someone very familiar with the novel I could barely follow what was going on. In short, it's an incoherent, disjointed mess.
Aside from being confusing and disjointed, I found that this manner of story-telling really robbed me of the ability to develop empathy and investment in the characters as I follow them through their trials, as in the chronological presentation of the tale in the original novel and 1994 miniseries.
The 2020/21 miniseries creators also decided to change several of the characters to non-white and female possibly because they deemed Stephen King's novel not diverse enough. Changing of characters can work and I don't take issue with it in and of itself, but changing characters just for the sake of changing them doesn't always work especially when the characters are completely reworked. Changing Ralph Brentner, for example, was not just re-gendered, the character was completely changed to turn a humble, bumbling farmer into some sort of hard-bitten warrior woman type. Pretty much the opposite of what that character was and I thought it went against the spirit of the story and the sorts of humble people that God called to His service in the novel.
I don't know what the miniseries was trying to do with existing very strong female characters. Odessa Young as Frannie Goldsmith just came off as perpetually pissed off. Just did not seem remotely like the character of the novel. I know not everyone liked Molly Ringwald in 1994 but I just couldn't like the new take on her at all. Just not a sympathetic character at all, when she's supposed to be one of the main protagonists. To me, rather than changing male characters to female, they would have been better off keeping the strong existing female characters true to the book. It may be that my dislike of the characters is a result of the style of presentation (again, the "disjointed mess").
It felt forced and propagandistic rather than mere artistic license to recast almost every character as nonwhite and/or female. I think it would have worked better if the characters still felt true to the original character ... it did work in some instances, I thought Larry Underwood played by Jovan Adepo worked.
Overall, the incoherence of the story, and the lack of connection to the characters created by all the confusing jumping back-and-forth in time had me tuning out very quickly and giving this 1 star. I would much much rather just re-watch the 1994 miniseries.
Posted by Godfrey Blackwell at 13:58