The First Christians in Mecca 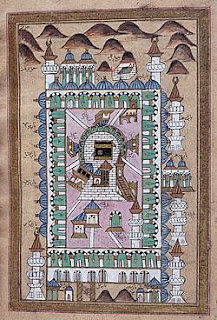 While refreshing myself on the life of King Baldwin IV of Jerusalem, I re-read The Leper King and His Heirs and was reminded of the interesting little tale concerning the first Christians to visit Mecca. Italian traveller and writer Ludovico di Varthema (c. 1470-1517) is generally recognized as the first European non-Muslim known to have entered Mecca. Nearly three hundred years earlier, a pair of crusader knights visited Mecca in far less pleasant circumstances ...
The backdrop is Saladin's war with the Latin Kingdom of Jerusalem which began in early 1182. After victories by the Royal Army led by King Baldwin IV (who was by this time suffering terribly from advanced lepromatous leprosy) at Le Forbelet and at Beirut Saladin had withdrawn to Syria to campaign against the Aleppan Muslims who were not subject to him. During this "break" in active combat in the Kingdom of Jerusalem itself in early 1183, Raynald of Châtillon (a man unjustly villainized by many histories and by that abomination, Kingdom of Heaven), outfitted a flotilla of five galleys which were launched into the Red Sea where they were able to wreak much havoc behind Saladin's lines. Saladin's governor of Egypt, al-Adil, was able to get ships transported by land from Alexandria to the Red Sea and eventually routed this Christian force. After abandoning their ships, they surrendered, being trapped on the sourthern part of the Arabian Peninsula with no way of marching back home. When al-Adil asked Saladin what to do with these prisoners of war, he ordered that they all be executed, and reserved an especially grisly fate for two knights.
It is noteworthy that this episode does not come from European or Christian sources; in fact, the Frankish sources of the time make no mention of this particular expedition. Rather, this comes from Islamic sources, which can hardly be accused of being "Islamophobic" or prejudiced (if anything, they could be accused of being biased in favour of their fellow Muslims). Back to the story: the "special fate" of these two knights I mentioned, was described in a letter written by al-Imad, contained in Abu Shama's (1203 - 1267) The Book of the Two Gardens[1]:

They were taken to Mecca where, during the great annual pilgrimage, they were led outside the city to Medina. This is a stage in the pilgrimage at which the faithful offer animals for slaughter and give their flesh to feed the poor. There, among a zealous and hostile crowd of thousands of pilgrims, the two Christians were slaughtered 'like animals for sacrifice', presumably by having their throats cut.[2]

So, some three hundred years before Varthema these two Christian knights had visited Mecca and were then given the crown of martyrdom in Medina shortly thereafter by members of that great "religion of peace". As to the "honourable", "just", "tolerant" Saladin (who is especially lionised in Kingdom of Heaven)'s part in ordering all of this:

al-Adil had misgivings about executing all these prisoners, for in accordance with Islamic law, their lives should have been spared because they had surrendered voluntarily, but Saladin had no scruples of this kind.[3]

And speaking of martyrdom, this same book (The Leper King) also mentions in the same chapter the treatment of Latin Christians by the Byzantines, a group who, like the Muslems, are made out to be innocent, peace-loving victims of the vicious Franks (cf. the sack of Constantinople) by most popular historians. When Emperor Manuel Comnenus died in 1182, his widow Mary of Antioch (a Latin) was overthrown by Manuel's cousin Andronicus Comnenus. His coup was bloody:

When Andronicus advanced on Constantinople, there was a spontaneous uprising of the mob, who massacred all the Latins in the city, regardless of age and sex, and cut off the head of the papal legate. Even the hospital of St John was sacked and its inmates murdered.[4]

The Franks were certainly guilty of some brutalities of their own, we can't deny that. But on the whole, they were far less barbaric than those around them. Other than the sack of Jerusalem (which is generally exaggerated) their rule of the Latin Kingdom of Jerusalem was quite benign: see Chapter 3: The Kingdom of The Leper King. In fact, read the whole book; it is an excellent account based on primary sources of a very important and misunderstood period of a misunderstood era, that of the Crusades.

[1] An account of the dynasties of Nur ad-Din (Saladin's predecessor) and Saladin, which makes careful use of contemporary sources including letters and a history written during Saladin's life by a Shi'ite scholar from Aleppo named Yahya Ibn Abi Tayy. (Cf. Hilmy, M. and M. Ahmad. "Some notes on Arab Historiography during the Zengid and Ayyubid Periods (521/1127-648/1250)". Historians of the Middle East. Ed. Bernard Lewis and P.M. Holt. Oxford: Oxford University Press, 1962. pp. 90-4)
[2] Hamilton, Bernard. The Leper King and His Heirs: Baldwin IV and the Crusader Kingdom of Jerusalem. Cambridge: Cambridge University Press, 2005. p. 183
[3] Ibid., p. 184
[4] Ibid., p. 173
Posted by Swords and Space at 06:00