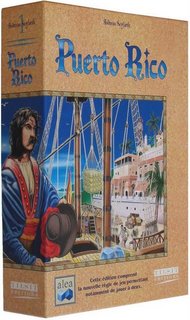 Name: Puerto Rico
Game Designer: Andreas Seyfarth
Publisher: Rio Grande Games
Rating: 4 stars (out of 5)
Summary: A unique, and surprisingly enjoyable game of economic management and strategic thought.
Puerto Rico is an "Age of Discovery" game, where the players take the roles of plantation owners in the newly-founded colony of Puerto Rico, competing to amass the most victory points by the game's end. These can be accumulated by shipping goods back to the Old World and through constructing special buildings. The manner of play is very unique; it seems a little complicated at first, but it doesn't take long to get a firm grasp of the rules. Each turn, the players select a "role" such as mayor, builder, craftsman, among others, which guides what they can do. The person to select the role gets a special benefit, then everyone else plays the role normally. Then the next person selects a role, and so on. In the picture below, you can see an example of the board each player has, with a few crops and buildings already in play and some money and victory points in the top right corner; the available roles are laid out above. Crops can be sold for money to purchase buildings with as well as shipped back to Spain for points. 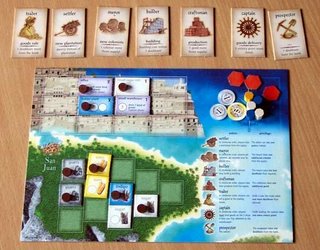 Below: croplands and buildings must be "worked" by colonists, signified by the little brown puck-like tokens. 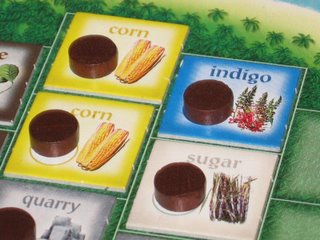 It sounds a little strange, I know -- this whole "role" thing was what stopped be from buying the game myself for many years (despite rave reviews from other board game geeks of my acquaintance), but my sister bought it for me for Christmas a few years ago and I am very glad she did. Don't let the unique and exotic-sounding rules turn you away -- overall this is an excellent and enjoyable game that anyone can play. I am a huge fan of strategy games myself, However, my wife and sister-in-law, who are not strategy gamers at all, were able to quickly grasp and enjoy Puerto Rico. I think this is a key to games of this type, as you want everyone to have fun. Be warned, though, that this game isn't exactly light -- it does requires concentration and thought! This only makes it more stimulating, in my view, which is what we should be striving for otherwise we might as well rot our brains in front of the TV.
Below: the main game board that houses all the buildings available to be built, and the bank. 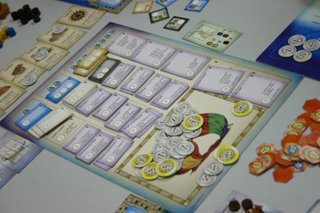 Puerto Rico doesn't have as much interaction as The Settlers of Catan does, but it still makes for a very fun evening or rainy-day entertainment. People will have fun trying to out-smart each other with the proper selection of roles, and trying to get their goods aboard ships before the others can, to reap the victory point rewards. The game involves no warfare, or anything objectionable (perhaps some P.C.-types would be offended by the colonial theme -- which makes it even better in my view). In the games we played there was lots of laughter. Luck is a very limited factor in this game, making it more strategy-oriented.
A game of Puerto Rico takes between 1 and 2 hours, depending on how many players you have and whether you're having to explain the rules to others as you go. It seems to average for around $25 USD, which in my view is a bargain for all the stuff that you get in this game, and the replayability. Every game will be different and there are many paths to winning based on the mechanics of the game, and therefore as a strategy game I think this has more replayability than some. In fact, Puerto Rico really demands to be played numerous times because successful strategies are not self-evident.
Overall, I still like The Settlers of Catan better, but Puerto Rico seems to have wider appeal as boardgamegeek.com rates it nearly 10% points higher than Catan. It is definitely an enjoyable game and I highly recommend it to anyone that wants a fun game that doesn't take too long to play and is intellectually challenging. For some more reviews of the game, you can go here.