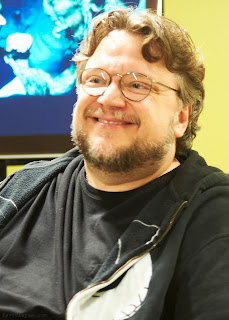 "Much like fairy tales, there are two facets of horror. One is pro-institution, which is the most reprehensible type of fairy tale: Don't wander into the woods, and always obey your parents. The other type of fairy tale is completely anarchic and antiestablishment."

This isn't the craziest thing I've ever heard, but I still think it's pretty darn foolish and especially coming from a man who's experienced, personally, a taste of what anarchy is like (the banditos who kidnapped Mr. del Toro's his father were not exactly docile pro-establishment drones).

It's also rather odd coming from a man who, like myself, is a big fan of science fiction and fantasy (similarities between myself an Mr. del Toro end there) -- because the genres to be almost exclusively "reprehensible" because they are "pro-institution". Certainly all the best of these genres is heavily pro-institution and the grandfather of them all, The Lord of the Rings series is not only pro-institution through-and-through, but practically a catechism of that institution that Mr. del Toro hates the most, Catholicism.

The theme common to fantasy fiction especially, that makes almost all of it "reprehensible" and "pro-institution", features a sort of "conservative" past social order that has been corrupted and is restored (or sought to be restored) by the heroes. This is certainly true of Lord of the Rings where there is much talk of the glories of the past, the decadence of modern Gondor and Rohan, the emergence of the evil power, and at the end a sort of "Counter Reformation" that restores the old order. Even Star Wars follows this arc, despite superficial appearances to the contrary, with the Rebellion seeking to re-establish the Old Republic and a resurgence of the Jedi Knights who had a long tradition (another "conservative/establishment" thing) of guarding peace and justice. This has lead hacks gentlemen like Michael Moorcock to whine that fantasy is inherently politically conservative.

The inherent "conservativism" (I mislike the word, but continue to use it here for convenience) of fantasy and sci-fi is a reason why children, the most inherently conservative people in the world, tend to enjoy these stories. I say children are inherently conservative because they thrive on order, routine, and stability. It is chaos and anarchy that they find fearful and why the whole "Dr. Spock" liberal methods have been disastrous (but that debate is for another column).

Perhaps Mr. del Toro misinterprets "libertarian" and "back-to-the-land" trends in works like Lord of the Rings (or maybe he despises LOTR and agreed to help write the screenplay for The Hobbit out of a malicious desire to twist it into his own image? I'll give the benefit of a doubt and assume he likes it) as "anti-establishment". Well, it may be anti- the current liberal, French Revolution inspired institutions that people of Mr. del Toro's persuasion centuries ago foisted upon the world through torrents of blood. But that doesn't make it "anti-establishment", it makes it "reactionary" or "counter-revolutionary" which is ultimately the epitome of "pro-institution" since it supports the ancient institutions. I think that this is why I often am able to get along so well with really liberal-types, like a lawyer colleague of mine who has run for the Marxist-Leninist Party of Canada; we agree that there are problems with the current system but we disagree strongly on the solution usually because such people (though well intentioned) are ignorant of history and what stuff like communism really stands for.

So it's just plain odd to be a big fantasy fan, but claim to hate it's inherent nature. As to why it is so wrong-headed to consider "pro-establishment" fiction "reprehensible" ... that could be the subject of a multipage rant. But let's just look quickly at Mr. del Toro's quote above, wherein he says that a story that teaches children "always obey your parents" is "reprehensible" is plain lunacy. Certainly, as a parent himself, he does not believe his children should not listen to him. It's just so plainly obvious that parents know more than children and the very purpose of parents is to teach and protect their children. So he's saying a story that reinforces the duty of parents is evil? The great irony is, that it is liberals ( Mr. del Toro acknowledges that he is one) who are the most "pro-establishment" because they tend to be statists who think "the establishment" should control nearly every aspect of our lives and "protect" us from ourselves with myriad regulations and Big Brotherly watchers. The "evil regime" of Generalissimo Francisco Franco that Mr. del Toro hates so much didn't have Child and Family Services who abduct peoples' children for drawing a picture of a gun! To be blunt, it's not just irony, but rather hypocrisy and liberal endeavours are ripe with it.
Posted by Swords and Space at 06:00