By Anna and Barbara Blackwell (April 2019) 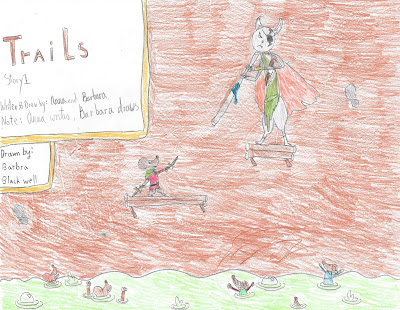 When a group of mice were captured by the ruthless badger named Spoon Paw tried to free themselves from the their slavery, they were unfortunate in their attempt. But it came to pass that a weasel named Fork decided to free them but he wanted to use them for his own purpose.

When he "rescued" the mice from Spoon Paw, the mice were furious that Fork wanted to keep them enslaved and they fought back. Spoon Paw managed to find them again and recapture them and threw them along with Fork into a cauldron of water. The mice struggled to save their lives from drowning; a mice named Joseph climbed out onto a flat form and came face-to-face with Fork.

Fork was furious and engaged Joseph in mortal combat. Unfortunately Joseph was terribly injured but as he bled to death he threw a dagger at Fork, stunning him he fell into the water. But Joseph was too injured and weak himself and both he and Fork drowned.

Later some mice found the cauldron of drowned mice, Joseph and Fork among them. Spoon Paw, who had slipped away into the shadows claimed to himself the victory. Some still say he lives in his burrow. To this date the tale is told around bonfires in Season Folk villages; some still believe that Spoon Paw still lives and seeks to enslave more mice.
Posted by Swords and Space at 06:00