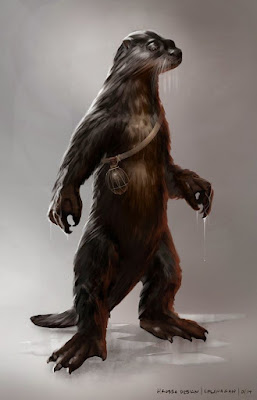 A Hross from C.S. Lewis' Out of the Silent Planet

As a Catholic who enjoys reading and writing science fiction, one dilemma I've had to consider is theologically, is the existence of non-human sentient beings possible? At first blush, it may seem problematic because there is no mention of life outside of Earth in the Bible or traditional theology. There is the fact that Jesus Christ (not only God, but a human being) is the saviour for the entire universe -- so where would that leave non-human sentient creatures? It is interesting to consider how they might fit into God's Plan and how we might explain same to nonbelievers or fellow Catholics who might be shaken (some could think the existence of "aliens" means that evolution is true, or that Adam and Eve did not exist, &c.).

I've discussed this topic a number of times with fellow Catholics and there seem to be a few lines of thought. The first question is whether they are ensoulled creatures or not?

One line of thought is that if sentient creatures had souls, then God would have to have a different salvation plan for them than for humans, since they would not be descendents of Adam. They could be more like angels (not fallen) or I suppose they could be fallen and in need of redemption but this raises further issues as Christ is the redeemer of all yet how can he redeem non-human creatures who are not descendents of Adam? That said I'm not aware of any explicit teaching that excluded the possibility of races with immortal souls who are not descended from Adam with an alternate path of redemption.

There is also the option of creatures with immortal souls who never sinned and therefore, like angels, are not in need of redemption. This appears to be what C.S. Lewis portrayed in his Space Trilogy.