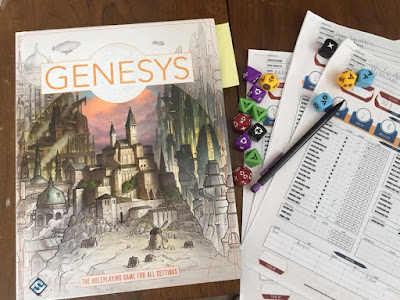 I remember when I was growing up that role playing games, especially "Dungeons & Dragons" had a bad reputation, especially among religiously-minded people. This was no doubt due at least in part to the much publicized murder of Lieth von Stein by his drug addict step-son and friends -- and the TV docudramas that focused on the fact these punks played Dungeons & Dragons. Also, Protestant polemicists like Jack Chick spread tracts claiming that the game encouraged sorcery and the veneration of demons. Of course, Jack Chick also calls the Catholic Eucharist "The Death Cookie", says that the Catholic Church not only founded Communism but also Nazism, and claims the Vatican has a computer databank of every single Protestant in the world for use in future prosecutions.

I have always been of the view, however, that D&D or any other role playing game is only as good (or bad) as the Game Master (the person who runs the game) and, to an extent, the players. Since it is a game with few set parameters and the game master makes up the story and charactrers for the game, he does have the power to insert bad or depraved scenarios but also good ones and to teach good lessons.

I've described RPGs to my children as something like a "choose your own adventure" book, but with almost unlimited options instead of just one or two per page, since you have a live narrator in the GM reacting to your choices in real time. So again, like any author, the GM has the ability to make a good or bad story.

With all that in mind, I've been looking for a game that the family could play together, since the girls are not interested in the war games that are the tabletop miniature games like Flames of War and Star Wars: Legion. We decided to give Role Playing Games a try since there is so much you can do with them that is not combat related. You can easily do games with no combat at all (but there will be some in ours to placate the boys). I decided to pick up the gaming system by Fantasy Flight Games called "GENESYS" because it is a "generic" role playing game suited to stories in any setting from fantasy to modern/realistic to hard science fiction to space fantasy. I'll talk more about the setting we are going to start with and the roles that each will be playing in the coming weeks. Albert has offered to write some game session summaries too.
Posted by Swords and Space at 06:00