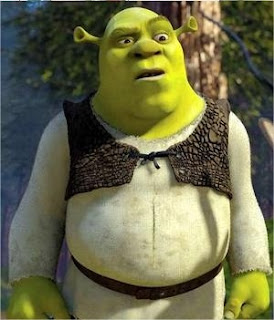 A reader asked me for my opinion on the "Shrek" films. I only ever saw the first two, and can't say I'm a fan of the franchise. To be sure, they are a source of some cheap laughs and I enjoy Mike Meyers.

But I don't like the underlying themes, the primary and most blatant being that evil is portrayed as good, good as evil, ugliness as beauty, and beauty as ugliness. Now, I suppose one could argue that the whole princess's true self being a troll is good for young girls in an age when girls as young as 6 are objectifying themselves as objects of lust, but I still don't like it. I think Shrek takes it too far in its quest to ridicule everything that is good and decent from basic hygiene to chivalry.

It also is a film that attempts to thoroughly demolish the sense of wonder and the marvelous in children with its cynical attacks on even basic manners and, casting the hideous evil creatures such as ogres and dragons in the role of heroes and casting normal humans and especially knights in the role of villains. It's also pretty cliché since this has been the standard for a while now. It's to the point that it might be downright "edgy" to write a story these days that features a knight or even (horrors!) a prince in the protagonist role (and not as an anti-hero). Or having a princess who DOESN'T pummel everyone, for that matter (Shrek's princess is, of course, is a hand-to-hand combat master).

The first Shrek film especially, also has a lot of "adult" humour inserted into it. I suppose the logic is that children will be too young to understand the double entendres and innuendos, but I do not like exposing them to that sort of crass humour. For example, the evil "prince" is a Lord Farquuad, which is a very thinl disguise for the vile f---wad insult heard in gutter speak today. Or when "Robin Hood" is singing a song he is interrupted by his Merry Men at a strategic point so that it sounds like he's referencing an impure act. There's a lot better stuff out there for children. I personally quite liked the Narnia adaptations and I am one of those rarities who likes both the Lord of the Rings novels AND Peter Jackson's film adaptations .

Further reading: Nourishing an Appetite for the Marvelous by Dr. Marian T. Horvath
Posted by Godfrey Blackwell at 06:00

Email ThisBlogThis!Share to TwitterShare to FacebookShare to Pinterest
Labels: Musings