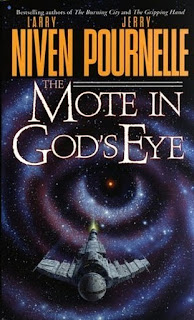 Title: The Mote in God's Eye
Author: Larry Niven and Jerry Pournelle
Publisher: Pocket
My Rating: 4.5 stars (out of 5)
Summary in a Sentence: The "Second Empire of Man" encounters aliens for the first time and they struggle towards the truth about this very alien race, in an excellent and gripping suspense novel that meticulously examines every aspect of First Contact and is devoid of the smut that characterises the vast majority of contemporary science fiction.

Good science fiction is often difficult to come by, especially if one looks at works written in the last decade. The genre has, sadly, in all to many instances, degenerated into little more than immorality in a futuristic setting. But one can still look back to the 70s and earlier and find many quality works, among them is The Mote in God's Eye, a masterpiece of science fiction writing in my opinion.

It tells the story of first contact between man and an extra-terrestrial alien race. This contact begins when a small probe propelled by a solar sail, arrives in the New Caledonia star system after a centuries-long trip from "the Mote", a small star that looks like a speck against the red eye of a red giant. The Imperial Navy Star Ship MacArthur under the command of Lord Roderick Blaine, heading to New Scotland for repairs after helping put down a rebellion, is the nearest ship and is sent to intercept. The lone crewmember of the alien ship dies of an apparent life-support system failure when Captain Blaine brings the ship aboard. The local viceroy decides to put together an expedition to the Mote to make contact with the race that sent this ship (although the Empire encompasses thousands of worlds, no sentient alien life had yet been discovered). Against the objections of pacifist scientists, the expedition consists of the MacArthur and an even bigger battleship under the command of a particularly ruthless Admiral Kutuzov who has orders to destroy MacArthur if there is any risk of the aliens capturing any Imperial technology (such as the Alderson Drive which allows for instantaneous travel between stars, and the Langston Field, a kind of forcefield). With MacArthur packed with a scientific team on top of her regular compliment, a Mohammedan businessman under house arrest on suspicion of treason, and Lady Fowler, a noble rescued from the revolt Captain Blaine helped quell (and who refuses to get off the ship), they embark for the Mote.

Unlike many novels of this genre, the authors consider every angle of first contact from economical, to political, to religious. They also consider all of these without the novel ever dragging and, interestingly, from the perpective of a Catholic empire that somewhat resembles the British Empire at it's height. I'm not sure why authors (who from their other works are clearly no friends of the Church) chose to do this, but it makes the story all that much more intriguing to the Catholic reader (and apparently to non-Catholics as well, as this is one of the more successful science fiction novels of all time and much preferred to its sequel, which I shall review later, which gives the reader a far less Catholic version of the Empire of Man).

The aliens are incredibly well done. They are totally alien without being so strange that the book is confusing or meaningless. They are so well developed that when a priestly character considers whether they might be ensoulled being or not, the Catholic reader can consider along with him. The mutual mistrust between the aliens (called "Moties" -- the novel makes the reasons for this nomenclature and the title of the novel clear) adds great suspence, for just as the human hold some things back, it's clear the Moties are holding something back (indeed, a terrible and potentially deadly -- to humanity -- secret).

The characters are for the most part well done. Although a few of them felt cliche, I still enjoyed them and didn't find this detracted from the novel (in fact, it was refreshing to read a book where every character didn't have to be "unique"). The book overall is excellently written and keeps the reader glued to the pages throughout.

Catholicism in the Novel

I want to return to the Empire of Man from this novel and its Catholic aspect because not only does it warm the cockles of my heart to see old-school Catholicism in a novel, it also tells us a lot about how non-Catholics percieved the changes wrought by Vatican II (especially when we compare the empire to its incarnation in the sequal). The Mote in God's Eye was first published in 1972 (Wikipedia is wrong on this point; I have a first edition copy which is copyrighted 1972), which means that it was most likely written during the late 1960s. The Novus Ordo Missae had not yet been released, Archbishop Lefebvre hadn't felt the necessity to form the S.S.P.X yet, the Pope had recently come out in favour of traditional teachings on contraception, and to outsiders the Church must have seemed to be pretty much the same as ever.

Although the word Catholic is never used in the novel, Catholicism is clearly the official religion of the Empire of Man. The MacArthur (the ship sent to the Moties' home world) is blessed by a Cardinal wielding an asperger before they leave on their trip, the ship carries a chaplain who is a celibate, Latin-speaking priest, and there is frequent mention of bishops and of "the Church" (upper case "c" is significant).

This Catholic Empire has some of the following peculiarities that also make the novel (inadvertently, no doubt) a source of some good moral examples:


The Mote in God's Eye is not fluff reading, as a number of important topics are dealt with, although the religion aspects are certainly given much shorter shrift that I'd have liked (on the other hand, non-Catholics trying to deal with Catholic theology in any depth would have been a disaster, so the surface treatment given to religion may be a blessing). In sum, I highly recommend this novel to anyone who has even a passing interest in science fiction.
Posted by Godfrey Blackwell at 06:00

"The Mote in God's Eye" was one of my favorite novels before I converted in 2013. I first read it in high school over a quarter of a century ago. I loved it even more when I re-read it two years ago. It held up remarkably well, as timeless classics will. It also inspired me to write my own Catholic sci-fi: "One Last Flight"

Thanks for reading and for the comment! Is your story "One Last Flight" available online anywhere? If so, can you post a link?