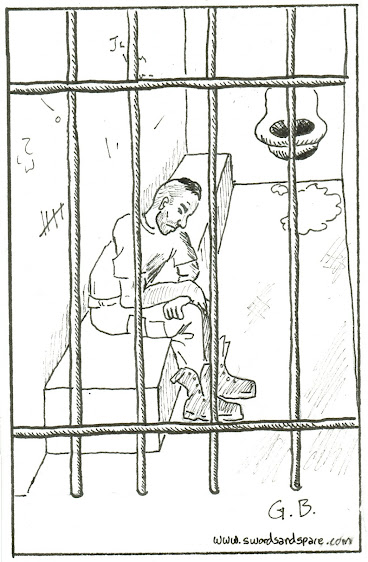 “Are you frigging kidding me?” Alex, one of my fellow parishioners at Our Lady of Sorrows chapel, where we both attended the Latin Mass, screamed at me over the phone. “You know, I told you that you shouldn’t watch that garbage. But this is taking it way too…”

“Alex, come on,” I said. “You know me. I’m not crazy. I’m telling you what I saw. Tell me you haven’t been hearing weird stuff about this latest pandemic anyway.”

“Oh who knows man, the mainstream media isn’t saying anything and the internet is the internet. Look, I’m not debating this with you. If my advice to a client to keep his mouth shut was ever important, I’m telling you now to keep your mouth completely shut! Don’t spew any of this zombie nonsense to the police!”

“Alright. You talked to Nadejda?”

“Yes, she’s squared away. Look … I’ve got to go, but I know one of my longtime clients, a guy named Namestnikov got arrested this evening too. You’ll be sharing cells with him. Tell him you know me and he’ll look out for you. I know this isn’t your normal scene.”

I was a history professor at the Avon campus of Conestoga College. It absolutely was not my normal scene. It all started hitting me for real, as I mumbled a thanks and hung up the phone. The nervous-looking special constable hustled me out of the search room with the phone and down the hall into one of the row of holding cells attached to the Avon Police Service headquarters on the ground floor of the Avon Courthouse.

He left without a word. There was only one row of cells, all next to each other, so I could not see how many of the others were occupied.

“Yo, nice to have some company,” a voice with a heavy Ukrainian accent said.

“I guess we both have the same lawyer. Alex Velasquez is actually a pretty good friend.”

“Yo, respect,” a huge fist came out from the next cell. I reluctantly gave it a fist bump. “You can call me Namest. What you in for, bro?”

“You’re not in here for doing something to a kid are you?”

“You shoot a zombie?”

Namestnikov chuckled. “You Canadians man, if the TV don’t say it real, you don’t believe it. I read the real news online. I know. I seen enough govno.”

“Well, if zombies are real then that’s what I shot,” I said. “It was my neighbour’s body, but he was walking all weird, just making growling sounds like an animal. And those eyes … I shot him five times before he went down.”

“Last one in the head, right?”


No one came to take us to bail court the next morning. By about noon on the clock in the hallway outside the cell block, we still hadn’t seen anyone and Namest started banging on the cells and shouting to let us out. At about seven in the evening, we heard what we thought were gunshots, lots of them, in the main area of the police station but we could see nothing as our view was blocked by the concrete walls separating us from the hall that led to the search rooms, let alone the other concrete wall separating that from the main station, all with locked steel doors.

Through it all, the fluorescent lights hummed and cast the same bluish-white hue commingling night with day. By ten the next morning I admitted to Namest that not only had I been drinking from the toilet bowl in my cell I was getting really concerned.

“Zombies, bro,” Namest said. “We gotta get out of here. Can you see anything?”

My cell was the first in the row of holding cells and I could see through the doorway into the hallway that led down into the main police offices.

“I can see the locker where the guard put the cell key,” I said. “But it’s a good fifteen feet away. No way could I reach that.”

I looked around my cell for the thousandth time. There was just the concrete floor, the concrete slab that was supposed to be a “bed” and the stainless steel toilet. I had the rough blanket they’d given me, which was maybe six feet long.

“Namest, you’ve got a blanket, right?”

“What about the cell next to you? Is there one in there? Can you reach it?”

There was, and I was able to tie the three blankets together. I tried flipping them at the locker holding the keys like a long whip. The blankets heavy and it was unweildy, but I kept at it, whipping the long chain up and down repeatedly. It was impossible to have any accuracy. I finally sat down hard, sweating and out of breath.

After resting a bit, I tried at it again. Then I froze as there was a loud bang from down the hall.

There was another metallic KLANG!

“It sounds like it’s coming from that door just across from us.”

There was another crash and this time I saw the door shudder.

“That goes up to courtrooms,” Namest said.

Oh man, here it comes, I thought to myself. I retreated as far back in my cell as I could get as visions of Mohhamed’s blank eyes and that iron grip flashed through my mind. I crossed myself and prayed. There was nothing else I could do … when zombies poured through that door we’d have no way to fight them, but they also wouldn’t be able to reach us.

The door flew open with a boom like a gun shot and I jumped. But instead of a ravenous zombie, my friend Alex Velasquez burst through.

“Alex!” I gasped with relief. “What are you doing here?”

He retrieved the keys from the locker I’d been trying to open with the blankets and as he released us from our cells explained that the night I’d been arrested there were riots and mass panic throughout Southern Ontario. By the morning, no justice of the peace or judge could be found to run court and every officer who actually showed up for work was trying to keep zombies and chaos at bay. By the afternoon it was complete societal collapse.

“I just decided to hunker down in my office and wait for the worst to die down,” he said. “But darn it if you weren’t right, it really is the zombie apocalypse!”

“You sound almost cheerful about it,” I said.

Alex shrugged. “What am I gonna do, be all Eyeore like you about it?” He winked. “I won’t lie, it’s been pretty intense out there. And I’m starved. Let’s see if we can get some guns, then scare up some food.”

With the fire axe Alex had used to get the first door open, we smashed our way through into the main area of the police station. It was a mess of overturned tables, smashed chairs, and blood. We found no bodies, but we found a couple of C-8 patrol carbines and a few magazines.

“Well, at least police could be trusted with thirty rounds” I said, checking the load on my weapon. “Although I’d still like another half dozen mags each. We need one more for Namest though.”

“Nah, I okay with these,” the Ukrainian said, holding his massive fists up in a boxing pose. “I won a bronze for Canada with these in Beijing. And I never touched a popgun.”

“I don’t know if getting close to those things is a good idea,” I said. “But we’ve wasted enough time in here. We need to hit the road. I need to get home.”