Book Review: A Knight of the White Cross 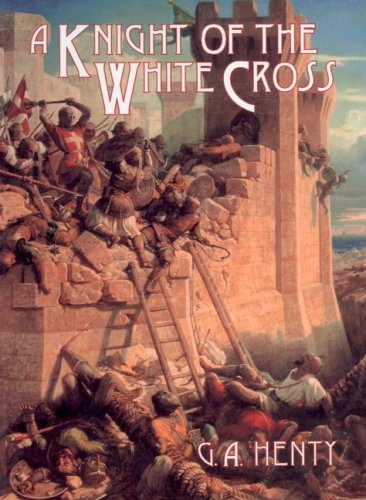 Title: A Knight of the White Cross : A tale of the siege of Rhodes
Author: G.A. Henty
Publisher: Lost Classic Books
Godfrey's Rating: 3.5 stars our of 5
Summary in a Sentence: An excellent book for young boys which follows the exploits of Gervaise Tresham, a fine role-model and young knight of the Order of St. John at the time of the First Siege of Rhodes (1480); available for free in Amazon Kindle

G.A. Henty wrote a whole slew of books for young boys starting in 1868. I read this book (a) because the Kindle version is free, (b) because my grandfather, a man of good character, grew up with these books, and (c) they are part of Angelicum Academy's Good Books programme which I intend to "indoctrinate" my children with. I found it, on the whole, to be a very good adventure book for young boys (Angelicum has it in the Grade 4 curriculum).

It tells the tale of Gervaise Tresham, son of an honourable knight on the losing side of the War of the Roses. Gervaise's father had promised the Lord God that if he had a son he would pledge him to the Order of St. John, and when his father is beheaded after the Battle of Tewskbury, Gervaise follows his father's wishes and joins the Knights and travels to Rhodes (as an aside, Sir Thomas Tresham was a real historical figure, but his son Gervaise is fictional -- Sir Thomas' real son was John and he did not join the Hospitallers). Once at Rhodes, in true Henty fashion, Gervaise embarks on a series of fantastic adventures, all of which he weathers with courage, humility, and grace.

The best part about this and the other Henty books I've read, is the most excellent example set by the main protagonist. One might argue that the protagonists are too perfect, and too similar (indeed, Gervaise Tresham is basically the same character as Rupert Holiday from The Cornet of Horse) -- but, I think for young boys' fiction this is a good thing. And Gervaise is possessed of, in good measure, all the major virtues: fortitude, temperence, chastity, prudence, justice (and his adventures give him opportunity to rely on these virtues in equal measure). The adventures Gervaise takes part in are fast-paced, varied, and sure to capture the imagination of young readers. I recommend this work almost without reservation to parents with sons.

I say almost without reservation, because some of Henty's Protestantism does show through. Although he's no anti-Catholic bigot like Sir Walter Scott, some conversations during the book between the knights about their vow of chastity belies a complete lack of understanding of the virtue of continence or of such vows. In the end, Sir Gervaise is released from his vows by the pope so that he may marry a wealthy heiress. But it is not egregious and a little bit of discussion will easily nullify this shortcoming of the work.