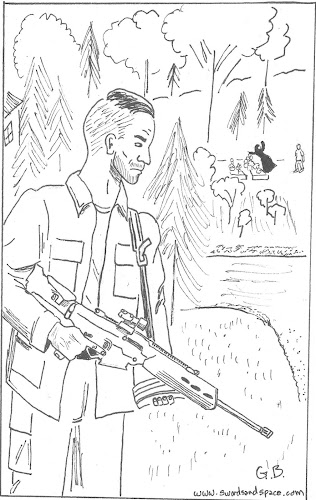 The sun had just started to touch the trees along the ridge across from my house in the hamlet of Falstaff just outside Avon, Ontario, giving a slightly subdued hue to the fading light, as I drove up the long drive. I was returning home from my last visit to the range before it closed indefinitely under the latest emergency medical order. I didn’t bother trying to suppress a sigh as I pulled in front of the house.

After the “COVID-19” lockdowns, I’d just started getting back to the range regularly this summer. As I put the Jeep in park, my phone buzzed. Probably my buddy Mike in Florida; we’d been exchanging texts between magazines while I was at the range. He was convinced that this was something a lot more serious than another COVID pandemic.

I pulled the key out of the ignition and took my phone out of the cup holder.

Paul, things are getting real sporty, real fast down here.

My buddy Chris who works at Memorial Hospital in Tampa just texted me. There’s riots there that make the BLM stuff look like nothing.


By brow creased. Mike tended to be a bit pessimistic, but this really did sound bad. I started punching in a reply wishing him well when a scream tore the air, making my head snap up. I jumped out of the Jeep with my head on a swivel trying to locate the sound. It was so quiet in our village this time of day that with the trees and the ridge, sounds tended to echo.

I heard the scream again — definitely a woman’s voice. Down the hill that led up to our house and across the road, I saw movement in the large garden beside our neighbour’s house one down from us. Khatol, easily recognizable from a couple hundred yards away in her black burqa (she was the only person in our rural village of 100 who wore the traditional Muslim garb) all but flew from around the back of the place she shared with her husband Mohammed. In her panicked sprint, she tripped on the hem of her burqa and sprawled face-first into a bed of petunias.

I glanced back at my own place and saw Nadejda peering out of the living room window. I gestured for her to stay inside. I started down the driveway then stopped midstride as another shape emerged from behind the brown house across from us. It looked like Mohammed, at least his size, but the guy moved with a slow shuffling gait that looked nothing like Mohammed. Khatol shrieked again and scrabbled up out of the petunias and half crawled, half ran deeper into the garden.

I’m still not sure why, but something deep inside told me — no, screamed at me — to arm myself. Something primal told me that there was something very very wrong with this situation and not only Khatol, but I, was in grave danger. I reached into the open back of my jeep and with a quick turn of another key on the keychain still in my hand, opened my gun case and pulled out my Bushmaster ACR and a magazine. I slung the rifle, and as I trotted down my dirt drive I loaded the magazine. It was a legal mag, of course, so five rounds in it was “full” and I left the remaining bullets in the cardboard box in my coat pocket.

The saliva in my mouth dried up and I could feel my hackles rise and I closed the distance. Khatol tripped over a raised flower bed and again thrashed around as the inexorable shape pursuing her moved silently along. Khatol was now jabbering in Arabic.

“Hey, what’s going on?” I shouted, not sure whether I was addressing Khatol or her pursuer.

When I was within twenty yards, I recognized that, despite the bizarre gait, it was indeed Mohammed. He was beyond pail; his skin had a grey hue, and his eyes stared with a vacancy that chilled me to my soul. Unwittingly, I crossed myself.

“Mohammed, what on earth?”

I was within five yards when Mohammed lunged forward and grabbed Khatol, who shrieked louder than ever. I rushed the last distance and shoved Mohammed back. He staggered and fell over another of the raised planters. Khatol took the opportunity to regain her feet and sprint down the slope to the road.

I stayed between her and Mohammed, who slowly got up and uttered a low, inhuman growl. I noticed for the first time that the white undershirt he wore was stained red on the left side around the kidney area.

“Mohammed?” I asked, yet I felt I was not talking to my neighbour.

He came at me with sudden and surprising speed, and tried to grab me and snapped at me like an animal. I was barely able to step back quick enough to avoid the grab and the bite but now it was my turn to stumble over one of the flower beds. I rolled back and kicked at Mohammed as he continued to grab at me. He got a hold of one ankle and his grip was like iron far beyond what a man on permanent O.D.S.P. should be capable of. I kicked again and again but he wouldn’t let go. I kicked him in the face a good three or four times, and even though blood poured down from his nose and mouth and broken teeth bounced into the foliage he continued his attack, growling and muttering.

My heart was pounding, and in desperation I chambered a round.

“Mohammed for God’s sake, stop!” I shouted. “What are you doing?”

He grabbed me with another hand and I gasped in pain as the fingers bit onto my calf. With both legs now in his terrible grip, I had no choice.

The rifle roared impossibly loud. I thought that, despite the point-blank range, I had somehow missed as he didn’t so much as flinch. I fired again. The second shot tore out part of his shoulder and his grip faltered and he tumbled off down the hill.

There were more screams now — Khatol yelling in rapid-fire Arabic, and other voices as neighbours had been drawn by the commotion and the gun fire. I got to my feet and rapidly backed away from Mohammed who was again getting up. Khatol had apparently stopped her retreat as I saw she was just a dozen paces or so off behind me. Mohammed lurched forward.

“Khatol, get out of here!” I shouted.

I backed off until I bumped into her. She was crying and talking — to Mohammed maybe, or maybe she was trying to tell me not to shoot her husband again. But he kept coming. I pushed her and told her to run, but now she would not.

Mohammed raised his arms and opened his mouth with a savage rasp. The ACR roared twice more. He staggered slightly at the impact of the rounds. His torso was covered in blood, yet still he came. I had only one round left. I adjusted my aim up and fired. I had the briefest image of the round striking him between the eyes then he fell backwards and crashed to the ground, and moved no more.

Khatol shrieked and ran forward to kneel beside her dead husband. I looked up and saw another neighbour, Mandy, starting at me wish shock and rage.

“You murdered him! What’s wrong with you?”

By that point, I had decided that whatever I had killed, it wasn’t Mohammed. That wasn’t just a bad drug trip or psychiatric episode. Drugs don’t let a man keep walking after he’s received four mortal wounds from a rifle chambered in 5.56 NATO.

All the same, I felt sick. I ran not from Mandy’s accusations, but so I could vomit on my own property and not near the grieving Khatol. By the time I was done retching, Nadejda had made it to the end of the driveway.

I remembered Mike’s texts. Disease, lockdown, riots … a real pandemic this time. Good grief I thought, you can’t be serious. Zombie apocalypse? I’d watched the TV series and movies, I always enjoyed the genre. But this couldn’t seriously be what I just saw, could it? But if there was even a small chance …

“Najedja,” I grabbed my wife by the shoulders. “This might be even worse than it looks.”

“What, how could it be worse?” She said.

“Just … call Alex, and you get the kids inside and lock all the doors. Don’t open the door for anyone. You make them come with a warrant and a cutting torch but do not give up any of the guns if they want them. We’re going to need them.”

As it turned out, it took the police almost three hours to show up. When they charged at me, guns raised, I was already on my knees with my hands behind my head, and the ACR unloaded with the chamber locked open on the grass in front of me.
Posted by Swords and Space at 12:00