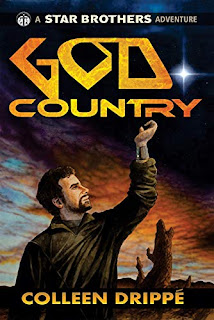 Title: Godcountry
Author: Colleen Drippe'
Publisher: Novelbooks
Godfrey's Rating: 4 stars our of 5
Summary in a Sentence: An original, highly engaging work of science fiction featuring the the adventures of former corporate slave Eduardo Sabat as he infiltrates the forbidden pagan "godcountry" on a remote planet on a rescue mission.

Colleen Drippe' is a fellow Catholic author -- one who's more actual author than "aspiring" like us here at Swords and Space so hats off to her. She and I (Godfrey) have exchanged several manuscripts and I've always valued her feedback. A while back she sent me a copy of Godcountry and it was very, very enjoyable. Certainly professional quality work and a lot better than most of what the library carries these days in the sci-fi genre. Consider supporting a Catholic author, and you'll get your money's worth with this book.

It is out of print, however Amazon still sells a Kindle version. Now, to the book itself, here's the summary given on Amazon and the back of the book:

Eduardo Sabat, corporate slave, is accidentally freed when his company's main computer is destroyed. He accepts a search and rescue job in planet Quele's Godcountry Preserve where he once served his company as a professional tomb robber. Before he departs, his estranged artist wife is murdered and he suspects Maureen, his first love and also a former slave. On Quele, he and Maureen stalk one another as she leads a rival expedition into the forbidden preserve. He asks himself -- does he hate, love, or pity her? And is she the murderer or not?


Quele is the planet that hosts "godcountry", which is an area revered by the pagans that live there who revere it as a sort of preserve where their gods dwell. For any unbeliever to enter is death. This was an interesting starting point, and the cultures represented in the work were rich and well-developed. As the summary suggests, the characters were also complex, unique, and interesting. Eduardo's shady background provided extra layers to what otherwise is a relatively straight-forward rescue mission plot.

I really enjoyed the speculative future that Colleen developed for this work. It is a future that recurs in a number of her works. To get around the question I struggle with of how to deal with sentient extra-terrestrial life, she posits a situation where tendrils of a wormhole-like thing called "the net" touch down periodically on planets. Thus, in earth's pre- and early history groups of humans were taken and deposited on far-away planets and have thus developed over millennia totally ignorant of earth. Thus providing some fascinating alien cultures and even people that often look rather alien. I thought this was a rather elegant solution and certainly original.

The story was also very well-paced, with lots of good twists-and-turns. She did not shy away from killing some characters, and presented an appropriately realistic human nature without going overboard à la A Game of Thrones. So good action, good conflict, but also a very good theme and moral to the work. Two thumbs up!
Posted by Godfrey Blackwell at 06:00