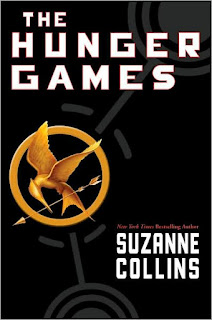 Title: The Hunger Games
Author: Suzanne Collins
Publisher: Scholastic Press
Godfrey's Rating: 2 stars
Summary in a Sentence: A mediocre "dystopian future"-themed young adult novel that features the disturbing spectacle of children killing each other in gladiatorial-style games, which has neverthless touched something in the young-adult crowd being a best-seller for some time now

Just to start off, a very quick recap of the basic plot of this novel, for those unfamiliar with it:

The Hunger Games takes place in a dystopic far-future North America, in a state named "Panem", composed of a capital and 12 districts. Years ago the districts rebelled, were crushed, and now as a punishment with send one randomly-selected boy and girl between 12 and 18 to the yearly Hunger Games. At those games the contestants battle to the death until there is just one survivor. Katniss Everdeen, a 17-year-old inhabitant of District 12 volunteers to be her district's female "tribute" when her 12 year old sister is chosen.


Much of what I wrote in my review of the film version of The Hunger Games applies to the novel, but I would add some commentary that pertains specifically to the novel. If asked which of the two I preferred, I think that the film was slightly less cynical and was a lot easier to "consume" owing to the fact that I really disliked the first-person present tense the novel was written in. It was like nails on a chalkboard for me, quite honestly.

But setting that stylistic concern aside, in terms of the cynicism, most of the characters were even more evil or unlikeable in the novel, whereas in the film they were made a bit more human with SOME redeeming qualities. Haymitch Abernathy (a previous survivor of the Hunger Games from District 12), for example, while still a drunk and a pig, was rather charmingly portrayed by Woody Harrelson in the film -- whereas in the novel he was completely disgusting, passing out in his own vomit and scarcely of any assistance to anyone. Katniss herself was, if possible, even less heroic and more out for herself.

This played-out especially in the "romance" between her and Peeta Mellark (the other District 12 "tribute"). In the film, it was ambiguous as to whether it was all an act or if she had developed some feelings for him. In the novel, it is made repeatedly clear that she is only pretending affection for him to gain a benefit in the game. Which left a rather sour taste in this reader's mouth, as this came across as a form of prostitution. Yet I wonder if this isn't another area of resonance with young adults, especially young ladies? Sex is literally pushed on these young people from a very young age with "sex education" in schools and a constant bombardment of sensuality in the media they are absolutely marinated in (television, music videos, the internet). And I suspect that the young ladies are not quite as enthusiastic about it all as the young men are, and thus to a degree feel "pressured" into it for reasons not unlike Katniss. Especially when coupled with the sense of abandonment from parents and the resultant "looking for love in all the wrong places".

The sense of abandonment for adults and even hatred of them was more prevalent in the novel. At least once per chapter or every other chapter, Katniss reflects back on her father's death and mother's depression/mental abandonment that followed. With these internal monologues, it is made more clear how completely Katniss had to care for herself and her sister.

Chapter nine has a quote that I thought fairly summarizes how many young people feel today: "All I can think of is how unjust the whole thing is, the Hunger Games. Why am I hopping around trying to please people I hate?" For sure, not all of today's young adults feel that way, but it seems that a number of them do, if one is to judge by anecdotal evidence, high suicide rate, and media. I believe that sense is part of why (perhaps subconsciously) the youth have been so drawn to this work. Of course, it's highly a problematic theme because it helps entrench the "war between the generations".

The worldbuilding was seriously lacking, and this is another area where I get my "mediocre" descriptor from. For science fiction, there was scarcely any world building to speak of beyond a vague sense that this is a far-future "post apocalyptic" world. There was no history presented other than the rebellion that led to the Hunger Games, no sense of how Panem came to be, why there was a revolt in the first place, how the districts came to be so thoroughly crushed that they don't protest the barabric spectacle of the Games. But further, the attempt at a completely "post-Christian" world made no sense, from a perspective of human nature. Let us assume that in this post-apocalyptic America all vestages of Christianity were eradicated so long ago that the society is basically a pre-Christian one (because of no knowledge of Christ or Christianity at all) -- people would not behave like modern liberals in such circumstances. The whole glorified suicide at the end is a good example of this. No society has ever treated suicide this way.

So, on the whole, I wasn't much impressed with the work. I didn't find it particularly original or entertaining. It was disturbing in parts, which isn't of itself bad, but as I referenced in the movie review,  was perverted in this novel with its amorality (or attempt at it). Ignoring the grating present tense, the writing was good but nothing extraordinary. Worldbuilding seriously sub-par. Characters were decent, but were better in the film (perhaps evidence of Suzanne Collins' skills improving since she wrote the screenplay?).
Posted by Godfrey Blackwell at 22:39