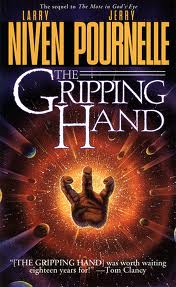 Title: The Gripping Hand
Author: Larry Niven and Jerry Pournelle
Publisher: Pocket
Godfrey's Rating: 2 stars
Summary in a Sentence: The substandard sequel to the masterful Mote in God's Eye where the next generation of the Empire attempts to finally solve the "Motie Problem" when a new Alderson point creates newfound access to the Empire from the Mote.

Nota bene: Since I do not recommend anyone waste their time with this sequel to the masterful Mote in God's Eye, I provide a number of spoilers without qualm in this review. Do not read this review if you intend to read The Mote in God's Eye until after you have read it ... I still recommend you read this review when you get a chance, however, as it sheds some further light on the first work and on contemporary Catholicism.

While last  I had much praise for the first book of this series, it feels as if different authors wrote The Gripping Hand - or perhaps they just rushed through in slipshod manner a manuscript that the publisher was clamoring for, given the success of the first. The result was a substandard book; one that they should not have written. It only tarnishes the legacy of the first.

After 25 years of blockading the Alderson Point to the Mote, the Empire must again face a real threat from the Moties as the formation of a protostar in the vicinity moves the existing Alderson point -- allowing the Moties to bypass the blockade (which was near to collapse anyway). A tiny force is cobbled together and sent to the new point, arriving moments before the first Moties arrive. The group consists of Horace Bury (one of the few people who appreciates the threat the Moties pose), the children of Lord and Lady Blaine, as well as a small customs ship. The rest of the novel is a convoluted tale of alliances, diplomacy, trade, and space combat between the many, many factions of Motie civilization.

The Empire of Man is far less interesting than it was in the first book, save for the comparisons that may be made between the changes in the real-world Catholic Church and those of this fictional empire over a 25-year period. More importantly, the novel lacks the suspense that The Mote in God's Eye had, and the characters are not nearly as loveable. The recurring characters from the first novel have lost the grittiness they had - rather than being real people, they now feel more like cutouts embodying liberal ideals. The new characters, most of them being spoilt rich teenagers, are "rebels without a cause". Far less interesting than the dutiful but scared sailors of the first novel.

Also, most of this book takes place among the Moties. The alienness of the Moties was interesting when we viewed them from the imperial cruiser MacArthur and through her crew. It makes for a less interesting novel to be living among these totally alien and totally amoral creatures. Finally, the book doesn't seem to flow the way The Mote in God's Eye did, and as a result it felt a chore to get through some sections.

Catholicism in the Sequel

Perhaps more than the first novel, The Gripping Hand gives us a lot of insight into how non-Catholics perceived the changes in the Catholic Church after Vatican II. This sequel was published in 1994 and was therefore written in the early '90s most likely. At this point in time the Timebombs of the Vatican II Council had all been deployed. The Novus Ordo Missae was thoroughly entrenched, Assisi I had been perpetrated, vocations were then a shadow of what they were in the late 60s, &c. Even to outsiders, the Church had clearly changed at this point in both appearance, approach to the world and worship, and even in teachings (perceived).

I don't think it is mere coincidence, then, that the Empire of Man that we see in this sequel novel that takes place 25 years after The Mote in God's Eye, is also greatly changed. Overall, it is much more touchy-feely, not the virile military machine that it was before. We also see that:
Interestingly, one of the prominent complaints in the Amazon.com reviews, is how different (and inexplicably so) the Empire of Man is a mere 25 years after the first novel. I think people liked the old-style confessional stat.

It seems to me that "The Empire of Man" in the second novel is basically a Novus Ordo version of its former self. Most of the differences to be found in a comparison of Catholic states pre- and post-Vatican II can be found in the Empire between the two books. Maybe they had another pastoral council in the 31st century that The Gripping Hand doesn't mention? It probably wasn't mentioned because the non-Catholics Niven and Pournelle did not understand why the real-world Catholic Church underwent such cataclysmic changes ... or maybe they didn't consciously notice the changes but just subconsciously wrote them into their novel.

Overall, this just isn't that good of a book. It's okay, and better than a lot of what passes for "great" science fiction today, but still not worth the effort. Enjoy the original, skip the sequel.
Posted by Godfrey Blackwell at 22:31