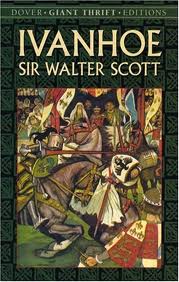 Title: Ivanhoe
Author: Sir Walter Scott
Publisher:  Tor Classics
Godfrey's Rating: 1 star
Summary in a Sentence: A supposed "classic" -- a classic example of anti-Medieval, anti-Catholic nonsense that started the tradition that spawned many foolish notions about that period in history.

Some years ago, having read very few of “the classics” in my youth, I decided to read the well-known Ivanhoe by Sir Walter Scott. Being someone who fancies himself an aficionado of the Middle Ages, I thought that I really ought to read it. Then, just recently, while perusing the offerings of various homeschool programmes, I discovered that a popular traditionalist homeschool (which I won’t name here) includes Ivanhoe as required reading in their Twelfth Grade Literature course. I therefore felt it necessary to take a detour from my original plan for the series and “defend Christendom” by dispelling the myth that this novel gives an accurate portrayal of life in twelfth century England. I do not intend this article as an attack on the homeschooling programme as they do a wonderful service to Catholic families, but I am concerned by the fact that such a work is included as required reading in their programme.

Sir Walter Scott is considered the “grandfather of the historical novel”, even the pre-eminent master of the genre. I am left wondering how this can be so. He clearly did about as much historical research for Ivanhoe as Dan Brown did for The Da Vinci Code. To the person that's done any serious research into life in the Middle Ages, it becomes obvious within a few pages that most of Sir Walter's perceptions of that time are products of his own imagination rather than any scholarly investigation.

Interestingly (and likely not coincidentally given the novel’s popularity), most of the myths/misrepresentations present in Ivanhoe are the very same time-honoured fables held by the average western educator of today. There are many, but in this article I shall look at the myths perpetuated as regards equating serfdom with slavery, the corruption of the clergy, and persecution of the Jews.

The swineherd Gurth is said to be his master's property and even wears “a brass ring, resembling a dog’s collar, but with no opening, and soldered fast” to underscore this[i] -- which is a calumnious misrepresentation of the relative freedom serfs in Mediaeval England enjoyed. Discussing those freedoms in detail is for another article, but suffice it to say for now that, while they no doubt lived a hard life, mediaeval serfs were not considered mere property, bereft of all rights. Rather, they could own property and sustained themselves through the gains of their own labour, rather than relying entirely on their “owner”. The serf’s lord was obliged (by custom) to protect him from external threats. And while he could not leave the land he was tied to, nor could he be evicted from it.[ii] Above all, there is not a shred of evidence anywhere that serfs were made to wear dog collars.

Every Churchman in the work is portrayed as both incredibly wealthy and incredibly immoral. The Benedictine Prior Aymer is the most obvious example of this, portrayed wearing a massive gold signet ring and other rings of precious gems, a silk habit with embroidered cope, and a scarlet cap.[iii] While it’s true that there were problems of corruption among abbots and priors in this time period, to suggest that they would dress this outrageously in public is quite incredible. Prior Aymer’s love of feast and women is played-up constantly as well. His depravity is only superseded by the Templar Sir Brian de Bois Guilbert who also, contrary to his vow of poverty, displays vast wealth in an ostentatious manner. He is also said by the author to be “accustomed to act upon his own immediate impulses of his own wishes”[iv] which he proves by many vile actions including the kidnapping of the Jewish character Rebecca. The only cleric with a shred of decency (because he helps rescue the kidnapped maidens) is the Franciscan Friar Tuck who doesn't honour any of his vows, but rather hoards wealth, feasts rather than fasts, is an alcoholic, is subject to no religious superior, and is the most impious individual of the whole novel.

Beyond these specifically bad characters, Sir Walter tells his readers that the only reason anyone entered religious life in the Middle Ages was for wealth and, in the case of women, goes to far as to claim that “it was then common for matrons and maidens of noble families to assume the veil, and take shelter in convents, not as called thither by the vocation of God, but solely to preserve their honour from the unbridled wickedness of man”, because of the “licentiousness of those times”.[v]

There is not one positive portrayal of clergy in the work and the lay characters for the most part constrain their religious references to profanity. The message of the novel is thus clear: no one in the Middle Ages actually took the faith seriously, they just “went along” with it as part of their culture and something they were “expected” to do (we may suppose this was because the Inquisition would burn them if they didn’t; Scott doesn’t say so explicitly, but suggests this via the show trial of Rebecca for witchcraft in Chapter XXXVII[vi]).

To disprove this particular myth expressed in Ivanhoe, would take an entire book describing the popular practice of religion in the mediæval period. But we can use our common sense to realise that it is totally absurd to imagine a society where religious faith is unanimously hypocritical. It is equally absurd to imagine that such a society could produce the quantity and quality of saints that it did. But to give one small, yet pointed example of how much the average mediæval person was willing to conform to Church law, we can consider that in the Middle Ages, Advent and Lent were “prohibited times” during which marriages were forbidden and continence strongly recommended. Historical evidence shows that a significantly reduced number of conceptions occurred during these “prohibited times”, at least among city people (the prime targets of preachers and missionaries), indicating that these injunctions were indeed heeded and practiced by many every-day Catholic.[vii] If people were willing to conform such a private aspect of their life to a mere recommendation of the Church we can be sure that the faith was taken seriously by most.

Persecution of the Jews

Sir Walter goes on ad nauseum about how horribly downtrodden, abused, and persecuted the Jewish characters are. He has no qualms about intruding into the work as omniscient narrator and judging the mediaevals for their treatment of Jews. Despite the melodrama, there is the internal contradiction to the work that the Jewish characters are the wealthiest people in the book and essentially move about as they please while all the Saxon characters are slaves. Scott contradicts what he tells us by what he shows us.

Yet the point remains that he would have us believe that the Middle Ages were a time when Jews suffered more than in any other period before or since. As with the preceding two myths of this novel, there is a kernel of truth here. Certainly, as people belonging to a religion that rejects Our Lord Jesus Christ, living in a nearly unanimously Catholic society, they had reason to be unenthusiastic about their surroundings. Occasionally, piety and religious zeal would “go overboard” among the Catholics leading to violence against Jews.[viii] However, the papacy and the kings of Europe gave special protection to the Jews, and Jews were in fact serfs of the Crown directly in many countries.[ix] They were not prevented from getting an education or pursuing careers in areas other than money lending, either, and the ranks of lawyers, physicians, and scientists contained many Jews.[x]

Some may try to defend this novel by saying that it's not meant to be historically accurate, it's just a fun read. As usual, this is considered a “just excuse” when Catholics and the Church are the victims of a work's inaccuracies. Beyond this, however, for many people, Ivanhoe may be their only exposure to the Middle Ages and will have their opinions formed accordingly.

Ivanhoe is not completely void of merit, so I concede that my comparison to The Da Vinci Code are not really fair and more abuse than argument. This perhaps makes the myths it tells even more tragic. The characters tend to be complex and original (with a few exceptions like Prior Aymer who is nothing more than a platform to attack Catholicism) and from that point of view the book was enjoyable. Scott does a good job of describing the landscape and setting a tone, although this may make the work more insidious from a historical standpoint as it really draws the reader into the world. Moreover, the plot is quite good, and through it, Sir Walter does do a good job of paying homage to chivalry and self-sacrifice. There is certainly a theme that good things cannot be achieved without sacrifice apparent in the work, but in the end, if one wants historical fiction one can do a lot better.[xi]

[i] Scott, Sir Walter. Ivanhoe. London: Marcus Ward and Company, 1878. p. 20
[ii] “Serfs and Serfdom”. Encyclopedia of the Middle Ages. Ed. Norman F. Cantor. London: Viking, 1999.
[iii] Scott, supra at note 2, p. 43
[iv] Ibid., p. 46
[v] Ibid., p. 202
[vi] Ibid., pp. 332 and following
[vii] Klapisch-Zuber, Christiane.“Women and Children”. The Middle Ages, Fifth Edition, Ed. Brian Tierney. New York: McGraw Hill, 1999. p. 186
[viii] And it should be noted that this was not always unprovoked or one-sided. For example, we can look to the ritual murder of St. Simon of Trent, a two year-old boy who was kidnapped and crucified upside-down by fundamentalist Ashkenazi Jews near Passover in 1475. Although the Vatican of today denies this event and forbids public devotion to St. Simon of Trent, recent scholarship by Dr. Toaff, a respected Jewish historian, indicates that it did happen because the confessions of the killers in the trial transcript contained details that the clergy and police could not have known. See: Horvat, Marian T. “Bloody Passovers Reported by a Jewish Scholar”. Tradition in Action. http://www.traditioninaction.org/History/A_010_BloodyPassovers.htm>
[ix] Hollister, C. Warren. Medieval Europe, Eighth Edition. Boston: McGraw Hill, 1998. p. 170
[x] Ibid., p. 172
[xi] The works of Sharon Kay Penman are quite good, but rather long. The Brother Cadfael mysteries by Ellis Peters are not bad (with a warning about the seventh novel in the series, The Sanctuary Sparrow, wherein the title character condones fornication). Shakespeare is always to be recommended and his history is fairly good since he lived only a few generations after the Middle Ages. I highly recommend without reservation Crusader King by Susan Peek (published by TAN Books) although it is mean for a younger audience than grade twelve. The novels of P.C. Doherty should generally be avoided because of immoral content, although they are historically accurate.
Posted by Godfrey Blackwell at 22:34