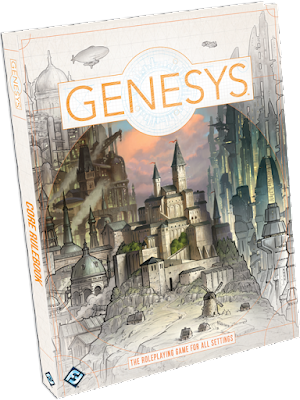 Strictly speaking, role-playing games aren't usually boardgames, and Genesys certainly isn't since a board is definitely not necessary. Some groups may choose to use one for simulating combat scenarios, but the core rules certainly contemplate no boards, just old-fashioned "pen and paper" (and dice) to play the game. That said, I'm reviewing this as a board games since that's the closest thing that fits ... and I must say that Fantasy Flight Games has knocked another one out of the park with this offering.

As I mentioned in a previous post, I played a fair bit of role-playing games in my youth and found them a lot of fun. I decided to try out Genesys since, as a"generic" system that was not tied to any particular setting, I could use it to make a game that was enjoyable for all of my children. I certainly made the right choice as the Genesys rule system excels and being truly generic and compatable for any setting one might imagine. For our first "campaign" (series of linked adventures) I created my own space opera-ish setting heavily inspired by the Alien movies (but without the eponymous and terrifying creatures).  The rules have worked really well for everything we need to do from astrogation, to firefights, to deciphering strange ancient glyphs

The games I found, and especially the combat, really feel like fight scenes from movies -- realistic, but not too realistic, with mechanics like "narrative points" for the players to spend at key moments to ensure that their "big darn heroes" don't meet an untimely end. The game is still very intense though and have had players on the edges of their seats. There's also been a fair bit of hilarity.

This is all acheived by the unique "narrative dice" system, that seemed a bit strange at first, but once we started using them I think they're fantastic. Most role playing game systems use various numbered dice from six-sided to 20-sided. Genesys uses these same shapes of dice but instead of numbers have symbols to denote "success" or "failure" as well as bonus "advantages" and their opposits, "threats" (we tend to call them disadvantages). You can read more about the mechanics here: https://www.fantasyflightgames.com/en/products/genesys/

For the purposes of this review, suffice it to say that it really makes the game creative and dynamic. Instead of having to pore over tables or have charts for this-and-that weapon in this-and-that setting, the game master just assigns a difficulty (and a corresponding set of difficult dice) and the player roles against it with ability and proficiency dice. Plus there are boost and setback dice that can be added for extra flavour -- so for example a rifle shot at long range would be a certain difficulty, but if its raining the GM can add a setback dice to reflect this.

Just as an example, something that I had occur a number of times in sessions is where a player would actually role more failure than success results, meaning they had not succeeded in their task, BUT, they rolled three or more "advantages" so as game master (with assistance of the players) we had to interpret how they could fail to do what they intended but with a whole pile of positive benefits. Usually we had the character succeeding but in an unexpected way (for example, a character trying to climb a cliff failed and therefore stumbled but in doing so, they swung on their rope to a spot that ended up being better and made the ascent faster than they would have on their initial course).

As such, I give the system a full 5/5 stars and we had an immense amount of fun with our first adventure which lasted about five or six sessions, with the Blackwell children begging dad every Saturday if we could play another session of Genesys. Albert took notes and we hope to have some session reports up soon to demonstrate the sort of fun we had!
Posted by Godfrey Blackwell at 06:00