Several months ago, I stumbled across the little-known Christian Bale film, Equilibrium. It inspired me to do up another list (the first was ridiculous space ships, which has proved to be one of my more popular "musings"), this time focussing on the worst futures to live in. There are a lot of dystopian futures depicted in film out there, and I haven't seen all of them, so there may well be some worse than what I list. But just for fun, I thought I'd throw down the five futures I'd least like to live in:

5. Megacity One - Dredd -After a nuclear war ravaged the earth, people have crowded into mega-cities. Mega City One stretches from Boston to Washington, D.C., an "unbroken, concrete landscape" with 800 million people crammed into it. You can imagine how crummy of a place to live it is already, but throw in the Judges who maintain law and order by summary executions, you've got a rather oppressive place to live in. Still and all, it's not ranked higher on the list because one can still live a relatively normal life here if he minds his own business. It's lot a lot worse than many tough metropolises in our world, although you can't get out of it because of the atomic destruction outside its boundary walls.

4. The Terminator Franchise - Another post-nuclear apocalypse future, although this gets ranked worse than Dredd's world because there's been a total breakdown in society and there is no civilization to speak of. Just small cells of "the Resistance" and other random groups who've banded together for survival. The machines that started the war constantly hunt the surviving humans, making this a pretty hellish future. But, the reason I don't rank it worse than #4 is at least the humans have for the most part banded together to fight the machines, and they are slowly winning that effort thanks to John Connor. It's bleak, but there's plenty to still live for here. 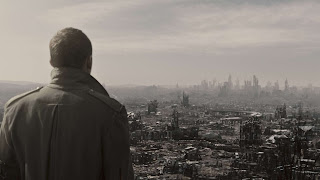 3.San Angeles - Demolition Man - Some might think it odd to have a "utopian" future in this list, let alone ranked #3. The 2032 amaglamation of Los Angeles, San Diego and Santa Barbara is a utopia of sorts -- there is no crime, no violence, but there's also no freedom and no humanity. It's illegal for people to even touch each other. The police have cool uniforms (jodhpurs!), but this society would be absolutely intolerable to exist in with all the sappy-happy-clappy nonsense and nannystatism to the maximum.  I'd rather live in one of the nuclear wastelands above where one can actually be human and have real human relationships.

2. Airstrip One/Oceania - Nineteen Eighty-Four -  The communist hell-hole that is the world in Nineteen Eighty-Four would definitely be one of the worst places imaginable to live. As annoying as San Angeles, above, would be, one would still live in material comfort and you get fined for swearing rather than going to Room 101. In 1984 everyone lives in poverty, is under constant surveillance by the Party (and their children, who are encouraged to denounce parents unfaithful to the Party), constantly bombarded by propaganda, and totally unfree. It doesn't get much worse than this, but it's still not #1 on the list because you are at least still human here even if it's only within your mind. 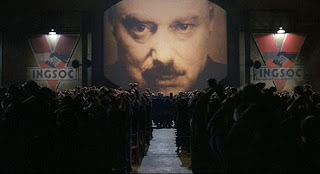 1. Libria - Equilibrium -This is the world of Nineteen Eighty-Four taken to the next level. It's got all the bad stuff listed above (perhaps slightly better creature comforts) but made even worse by the fact that ALL artwork is outlawed and gets burned Fahrenheit 451-style and everyone is forced to take regular doses of emotion-suppressing drugs. Making everyone in society little more than drones living just for the sake of survival. To me, it is an even more depressing prospect than the Nineteen Eighty-Four world and therefore takes #1 on my list.