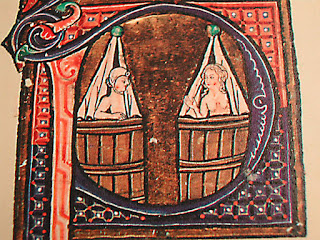 I recently thought that Witch World by Andre Norton might be worth trying for the leisure component of my reading. It was recommended to me by a friend as "an oldie but a goodie" especially as an example of mixing futuristic tech with a medieval setting as I've been fond of in my own work. Certainly, older sci fi/fantasy can be trusted not to have the immorality or "advanced" liberal themes that's all too common among today's offerings. It's not a bad book, but one line early on really caught my eye:

Medieval the hold of Estcarp might be superficially, Simon discovered, but the dwellers therein had some modern views on sanitation. He found himself introduced to water which flowed, warm, from a wall pipe when a simple lever was turned, to a jar of cream, faintly fragrant, which applied then wiped off erased all itch of beard.


Well, firstly, the opening comment about "views on sanitation" is just more of the old "medieval people didn't wash" nonsense that I addressed in "Hygiene in the Middle Ages". I'll give her the benefit of a doubt that maybe in the '60s decent research wasn't as easy to come by as it is now. So I won't rail against her. BUT, it is noteworthy that at least some real mediæval castles had even more sophisticated plumbing than Norton's Estcarpians and their "modern" sensibilities.

By the 13th century, important castles with permanent bathrooms had hot and cold running water (for example, Henry III's palace at Westminster had this amenity). More humble castles at least had water for washing and drinking at a central drawing point on each floor. Hand washing was sometimes done at a laver or built-in basin in a wall recess (certainly at the entrance to the great hall at least), with waste water carried away by a lead pipe. Castles also made use of rainwater from gutters or a cistern to flush the latrine shafts. Not as sophisticated as the modern toilet, perhaps, but certainly indicative of "views" on sanitation that were not to be sneered at by superior modern folk.

With a tip of the hat to Joseph and Frances Gies' Life in a Medieval Castle for some of the information in this post.
Posted by Godfrey Blackwell at 06:00