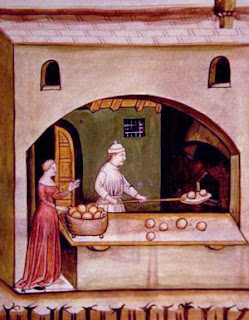 Reading Food and Drink in Medieval Poland (by Maria Dembińska) has given me some more grist for the mill of dispelling anti-medieval myths. "Popular" histories would have us believe that medieval peasants lived lives of unmitigated misery. The people of that time lived a hard life compared to ours, to be sure. But before getting into the foot, it's worth remembering that between a.D. 1000 and 1340, the population of Europe grew from 38.5 million to about 73.5 million people[i] -- something which would have been impossible if the average person were half-starved and worked into the ground by his aristocratic taskmaster.

Now, as for food, it's commonly believed that Medieval people scarcely had any access to meat and, again, it was their evil noble masters who were the only ones with such food on their table. Meat was relatively expensive -- it still is, especially if you're trying to maintain an all-organic diet like we do! -- but all the same, in medieval Polish society meat was considered essential to a healthy diet and to be consumed daily. Historian Andrzej Wyczanski calculated that manorial work hands (serfs) of the late 1500s consumed a little better than half a pound of meat daily -- and Ms Dembińska stresses that this is a "pauperized" state as compared to the High Middle Ages (I restrain myself from embarking on an anti-Renaissance rant at this juncture).[ii]

Further, according to Regine Pernoud, part of the reason it's been believed that Medieval peasants were constantly starving, is due to the fact that the word "famine" held a much different import in those days than it does now. "Famine" to them was not the total absence of food, as we consider it today, but the lack of wheat bread. Therefore, when the people of a certain area were instead eating rye bread, they would say that they suffered famine. Even then, such "famines" tended to be localized and of short duration.[iii]

P.S. If readers are wondering why my Middle Ages posts are all academic-style with footnotes and such, it's because I want to show that I'm telling the truth on this stuff since my "claims" in such posts go completely contrary to what prevailing wisdom holds.