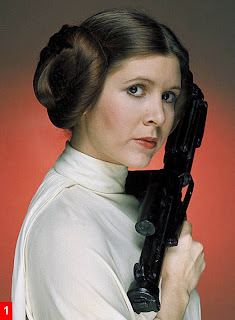 GODFREY: I want to stress that I am not holding myself out as some sort of authority -- I'm just a Catholic father sharing my thoughts at the request of a reader. So here we go; first with some general comments that apply to all six of the films. They all feature what in my view is mild fantasy violence -- blood is minimal, and what constitutes violence is usually bits of coloured light flying around knocking people down, burning holes in walls, or blowing up spaceships. I may be more permissive than other parents when it comes to violence, but I have no concerns with my children seeing this sort of thing even at preschool age. As a point of comparison, the violence is much more mild than that found in Peter Jackson's Lord of the Rings films.

The language in the films is clean, and the fact that it takes place in a fantasy world means there is no blasphemy of any kind. I can think of one instance where the word "hell" is used, and that's about as coarse as the language gets. There are no sex scenes; there is a bit of relatively tame kissing and in general (with exceptions noted below) the immodesty is no worse than one would observe in her day-to-day travels and is generally better.

The only real concerns may be over "New Age" themes with the Force. Again, perhaps I'm more permissible than others, but I am not overly concerned with this since it tends to be fairly mild, and in the prequel trilogy is made less mystical and more junk science. Also, in a fantasy world, I think children will be able to understand that it is fantastic and not real,  just as they can understand they can't be Gandalf when they grow up. So, in general, I think that Star Wars is safe for children but I would not recommend all the films.

My correspondent asked specifically about the appropriateness of Star Wars for a daughter, so as I look at the specific episodes I'll focus on how femininity is portrayed. It seems to me that, given how much female nature has been obscured and even perverted in modern society, we must be a little extra vigilant as regards our daughters in what may seem "small things".

On the whole, I consider A New Hope to be good, clean fun. Princess Leia is a feisty but still feminine character who relies on the heroes for protection and inspires them to good feats. Her costumes are also at their best in this film. The tale is a basic "good versus evil" plot with very little moral ambiguity. Recommended.


Episode V - The Empire Strikes Back

Okay, Princess Leia wears pants for much of the film which I'm not crazy about, BUT she is still her regular self, a strong-willed princess. Also, when living in a warzone on a planet that's all ice, I think this is what anyone would wear, and when she has the opportunity (on Cloud City) she gets into something more becoming. She doesn't fight on the front lines and proper roles are maintained. Again, more basic good versus evil. I think this film is to be recommended as well.


Episode VI - Return of the Jedi

Return of the Jedi is probably the most problematic film of the whole series if for nothing else, the notorious Princess Leia "slave" costume. More problematic for boys, perhaps, but still not a good thing. Among the many issues I have with Return of the Jedi, I think that it the portrayal of Princess Leia is in some ways not true to her character in earlier films and more of a "warrior woman" which as everyone knows I'm not a fan of. I certainly don't think it's a good role model for young girls. I'd skip this episode or regard it with a lot of caution.

Episode I - The Phantom Menace

As mentioned previously, I don't hate Episode I the way most do. I think especially for children it's a fairly decent film. Queen Amidala's portrayal as a gentle, ladylike figure who is concerned for her people and takes a leadership role (as befits a queen) to free them from the invasion of the Trade Federation makes for a good feminine role model. Her wardrobe a little over-the-top but generally pretty good. She gets involved a bit in the fighting but doesn't give that "Xena Warrior Princess" vibe at all. I think this film is pretty safe for young girls.

Episode II - Attack of the Clones

I only saw this film once and honestly can't remember much about it, other than that Queen Amidala's wardrobe is atrocious (especially when it gets conveniently ripped Captain Kirk-style to expose her midriff). Aside from that, it is just not a great film. I remember that watching it felt a bit like watching someone else play a video game. Not particularly engrossing or worth watching. You can watch Episode I and skip to Episode III without being lost plot-wise at all.

Episode III - Revenge of the Sith

Revenge of the Sith is probably the darkest of the Star Wars films, and this is mostly where I'd stress caution, plus also one scene where viewers are treated to sights of Hayden Christensen naked from the waist-up. I think the portrayal of female characters is okay, although we are starting to get into the Xena-style warrior Jedi-esses, which I believe was in Episode II as well.

There's a lot I could say about the first of the Disney Films, but focusing on its portrayal of femininity I have big problems with the film. Rey is a way over-the-top character who's better than everyone at everything, and picks up difficult skills like light sabre fighting instantly (the first time she touches one she decisively defeats Kylo Ren who supposedly single-handedly wiped-out all of Luke Skywalker's Jedi pupils). Just not good story-telling and it's Xena Warrior-Princess style feminism on steroids in my opinion.

Aside from the fact that this film is, in my opion, pretty much trash aside from the big battle near the end, once again we are treated to a female lead character who is good at everything. Jyn Erso isn't as bad of a "Mary Sue" as Rey as she actually has some character flaws and a few things she can't do. The main problem I have with this film is that all of the protagonists are "anti heroes" which is absolutely not what any child male or female should be looking up to.

Those are some very brief thoughts on this series of films which is one of my favourites.
Posted by Godfrey Blackwell at 06:00