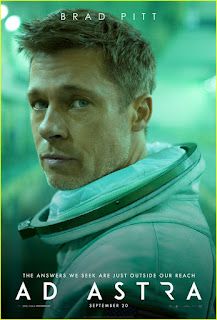 Title: Ad Astra
Director: James Gray
Producer: New Regency Pictures
Starring: Brad Pitt, Tommy Lee Jones, Ruth Negga
Godfrey's Rating: 2.5 stars (out of 5)
Rating: PG; I'd say this rating is appropriate and I'd have little difficulty showing it to the older children (13 and 11) as there not a lot of violence or profanity, and no nudity.
Summary in a Sentence: A thoughtful and stylistic film with great potential, but which falls short of the masterpiece it could have been, due to a lacklustre storyline with some very big plot holes and inconsistencies.

This is a film that I really wanted to be able to give a top rating, since it was full of many of the things I love in a science fiction film: strong thought-inducing themes, beautiful cinematography, relaxed pacing, and a reliance on story rather than big explosions. And while it was certainly worth my return to the cinema for the first time since Blade Runner 2027, I could not help but feel disappointed and cannot give the film more than a middling 3/5 star rating. The plot synopsis from the IMDB page:

Astronaut Roy McBride (Brad Pitt) travels to the outer edges of the solar system to find his missing father and unravel a mystery that threatens the survival of our planet. His journey will uncover secrets that challenge the nature of human existence and our place in the cosmos.

Ad Astra gets full marks for style -- I really liked the retro, 1960s space-race inspired flight and space suits. The "space ships" had a realistic feel to them and the film seemed to give at least decent effort to giving a realistic look and feel to all the sets. The military won major "rule of cool" points for wearing Fallschirmjäger-style splinter camouflage on earth, and orange-red Flecktarn on Mars. This is worth at least half a star bonus in my books.

The filmmaker seemed undecided on what sort of mood to strike. Is the film an optimistic space exploration film? Dystopian future? I'm not even sure ... it was a little bit of a lot of genres, a little bit of 2001/Interstellar, a helping of Moon's paranoia, a dash of Mad Max (moon land pirates), and a pinch of Gattaca (the constant psych evaluations throughout the film). I'm all in favour of mixing things up like this but I just don't know how well it was pulled off ... maybe I just couldn't wrap my mind around the dark aspects when guys are wearing space suits that look like what the Gemini astronauts wore. Having slept on it I think it actually worked better than I felt while watching it.

And while I love "long boring space movies" like 2001, I just couldn't get into this film in the same way. It had a slow pace, but I question the choice of what time was spent on. The viewer gets a few gorgeous space vistas but they are all too fleeting, rather we spend a lot of time inside Roy McBride's head as he sorts through his "daddy issues". The film did have some food for thought, but I think it was too wrapped up in McBride's neurosis and unresolved issues with his father abandoning the family to search for extraterrestrial life and then after all that buildup the final "confrontation" between father and sone was very anticlimactic, almost rushed (perhaps 15 minutes of the 2 hour film are spend actually aboard his father's ship), and very unsatisfying.

I found the acting to be very "low key", unemotional, and flat. This was perhaps intentional (cf. the Gattaca aspect),  but it also made it difficult to connect to the characters.

There were massive, massive plot holes, and inexplicable choices made by various parties. This is mildly spoilerific, but the whole plan to take down Clifford McBride made no sense at all and had zero chance of success until Roy intervened. And it was not clear why the authorities wanted him killed for intervening when he then goes on and carries out the mission. And why is that mission done by some random civilian science vessel that can apparently travel to Neptune in 72 days yet no one had been there since McBride Sr. went (and it took him something like 20 years to get there)? The moon pirates felt random and inconsistent with what's described as a war zone over disputed moon borders -- why do they just kill everyone and wreck the moon buggies instead of trying to steal and capture?

All in all this made for a dangerously close to mediocre film. I still hope that readers will go watch it for the good aspects, because even though this film isn't perfect, it's the type of film we need more of.