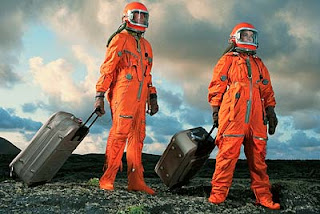 It's frequently shocked me that in the 1960s men were able to visit the moon at a time when the necessary calculations still had to be done with a slide rule and pencil-and-paper, yet fifty years later we have neither visited again nor gone any further. Things seem to have stalled as governments (except maybe the Chinese) lost much interest in space exploration. And as much as I'm interested in space exploration, I'm not sure it's a bad thing for government to get out of it. Is it really something the public purse should be paying for? Perhaps, perhaps not ...  but regardless, privatization of space exploration seems to be the way things are going ...

I think the Russians, in practical non-hyper-safety-sensitive Slavic style, were the first to start with a sort of "space tourism" to help fund their space programme in a faltering economy. Starting in 2001 they sent seven fee-paying individuals into space (halting the project when the space shuttle was retired and Soyuz became the only way of getting to the ISS). For $20-35 million USD a number of wealthy adventurers were able to spend 1-2 weeks aboard the International Space Station (see: http://en.wikipedia.org/wiki/Space_tourism)

Then there is SpaceX, founded in 2002 by Elon Musk, which has developed two families of space craft (including a re-usable rocket) which now routinely transport supplied to the International Space Station.

More ambitiously, Virgin Galactic (owned by Sir Richard Branson), has been preparing for years to take the first tourists into space. For $200,000 USD, 430 very wealthy people will supposedly be able to fly on a suborbital flight into space. Virgin Galactic recently unveiled its "Gateway to Space" launch centre/star port, although they still have no timelines on flights.

Then there was the Red Bull Stratos project, where stunt man Felix Baumgartner successfully sky-dived from low earth orbit -- the first time I can remember in my lifetime that a space "first" was achieved, and this one completely by private interests and for a publicity stunt.
Posted by Godfrey Blackwell at 06:00