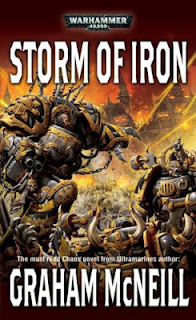 Title: Storm of Iron (Warhammer 40,000)
Author: Graham McNeill
Publisher: Games Workshop (Black Library)
Godfrey's Rating: 4 stars our of 5
Summary in a Sentence: An impressive work of military science fiction, even for those unfamiliar with Warhammer 40,000, which is full of tension and interesting characters, as well as a heavy dose of carnage.

Although I (Godfrey) have been a fan of the Warhammer 40,000 board game for many years, I only relatively recently delved into some of their "Black Library" titles, which are novels based in the universe the tabletop game is set in. The Black Library works have a poor reputation because I think many see them as glorified "fan fiction" and it's true that some of the works are not great. But this novel, the first I read, was a great introduction to the series and I would gladly recommend it to anyone who enjoys military science fiction. You do not need to be a Warhammer 40,000 geek like I am to enjoy this.

The novel of course takes place in "the grim darkness of the 41st millennium" which features a sprawling "Imperium of Man" centred on "Holy Terra" where the Emperor rests entombed in his golden throne after being mortally wounded by the traitor Warmaster Horus 10,000 years previous. Those who followed Horus are now known as the Chaos Space Marines for their worship of the Chaos gods (demons). They are divided into diverse legions just as the loyal Space Marines are divided into chapters. Storm of Iron features the invasion by a massive force of the Chaos Marines called "Iron Warriors" of the planet Hydra Cordatus.

Storm of Iron tells this tale from both the perspective of the sadistic, evil Iron Warriors and from that of the brave Imperial Guardsmen garrisoning the massive citadel on the planet which houses a treasure of inestimable value to both sides. I thought that one of the great successes of the author in this novel was his ability to portray the Iron Warriors as totally evil and unworthy of any sympathy from the reader, yet kept them interesting enough to hold the reader's attention.

The Imperial defenders were, of course, more interesting to me and the heroic stand of normal humans against genetically improved supermen (who've been further strengthened by demonic aid) was very stirring. It was among these that one found some very well-done characters from among both officers and regular grunts.

The plot was quick, with lots of action, but also a decent amount of story. There were many unexpected twists-and-turns that kept me guessing right until the very last pages as to what the outcome of this struggle would be. It is, admittedly, brutally violent in several scenes, but I thought this was realistic to a war novel. It may have been slightly overdone in some scenes, but on the whole was well done. There are is no foul language or sexual content in the novel. It gave the reader a very good feel for the Warhammer 40,000 universe, and did so in such a way that someone totally ignorant of that universe would not be lost. Again, I reiterate, that I recommend this novel to anyone who enjoys military science fiction, not just fans of the tabletop game.