Some Thoughts from Godfrey on Science and Faith 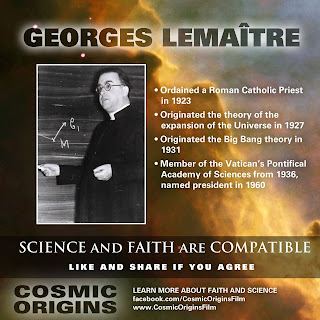 I saw the picture above posted to Facebook. I certainly agree that "science and faith are compatible", but I think that the picture wrongly suggests that if you believe this you MUST accept the "big bang theory". The thing is, it's just that -- a theory. And how could it be otherwise since obviously no one other than God Himself was around at the time to see what happened.

The Big Bang theory does make a certain amount of sense, but, it's unprovable, and furthermore, there IS scientific evidence out there in favour of a "young earth". Just because you ascribe to that theory doesn't mean that you believe science and faith are incompatible. And, frankly, it would be great if there were more open study of such questions. The problem is that the modern-day secularist inquisition forbids a truly open and honest discussion of these things. You must accept evolution or you're a crazy fundamentalist. You must accept the "big bang" or you're a crazy fundamentalist. Et cetera. And it seems to me that we're buying into that mentality a bit when we make memes and videos like the ones above.

Moreover, it seems to me that the reason modern "scientists" and university professors persecute those with "heretical" views is because in some respects they have elevated unproven theories to the level of dogma in some sort of quasi-religion which they call "science" but really isn't science. Hence the witch hunt for creationists and others. So the opposition isn't really between faith and science. They frame it this way to stack the deck in their favour. But the opposition is frequently between this pseudo-religion and faith.

Just some random thoughts.
Posted by Godfrey Blackwell at 06:00