Music to Write By 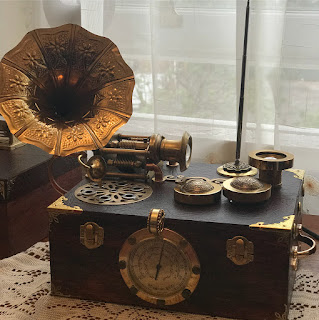 In an email exchange Dad recently had with a fellow writer, the use of "background noise" came up. This friend said he always writes with either a movie or music playing in the background. Others have said they would find it too distracting.

Dad/Godfrey certainly falls into the group of writers who almost "need" some background music while writing. Mood-appropriate music can really help get into the right frame of mind. As such, he listened to a LOT of Star Wars soundtrack while working on his space fantasy novel (which is in final re-writes so consider this your first "teaser").

Lacking time for any more substantive posts, I thought I'd share with you some of my favourite writing music -- maybe if you're a writer you can make use of it too:

Dad listens to music more since he owns his own devices, but Anna listens a lot while writing. Her favourites are "Saints and Sinners" and the "Snow White and the Huntsman".
Posted by Swords and Space at 06:00

Email ThisBlogThis!Share to TwitterShare to FacebookShare to Pinterest
Labels: Writing