For the "uninitiated", you may wonder what are "Sanguinary Guard"? Games Workshop, in its typical over-the-top style describes them as "the uttermost elite of the Blood Angels. They fight with wrist-mounted Angelus boltguns that leave both hands free for the wielding of crackling power glaives. The Sanguinary Guard are a brotherhood of mortals-become-gods and their deeds the stuff of legends." Their elite status is the reason for all the "bling" and why I love their look so much. The utter impracticality but aesthetic grandeur makes them the epitome of a lot of what I love about Warhammer 40,000. 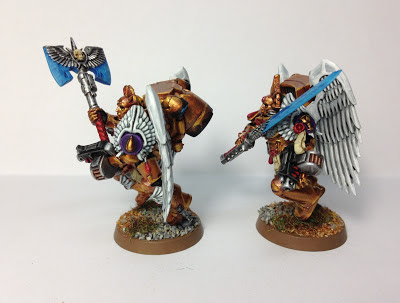 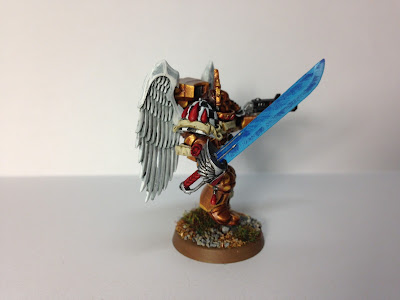 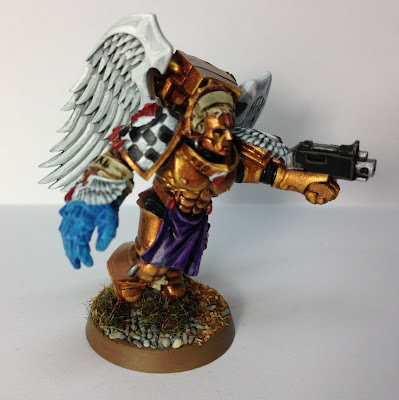 The glowing blue weapons, "crackling power glaives" are weapons that can ignore all but the strongest armour making these guys a dedicated close-combat unit. Their fancy armour is also strong in its own rite, tough enough to withstand their own weapons (except the big fist directly above which makes mush of everything). The checkerboard shoulder pads are part of my army's unique heraldry since they're not actual Blood Angels but a successor chapter.
Posted by Godfrey Blackwell at 06:00

I've never played this game before - how do you know, I guess you would say, there stats and power? Do they have cards or something?

Happy Easter, Alexander, and thanks for commenting.

Warhammer 40K has a main rule book, and then each "faction" has what's called a "codex" which contains all their stats and points costs. The stats line used in 40K has ratings for Weapon Skill (close combat), Ballistic Skill, Strength, Toughness, Wounds, Initiative, and Leadership. Just to give you a sense, a regular human has strength and toughness 3. A genetically engineered super-soldier like the Sanguinary Guard (and all other space marines) are strength and toughness 4. An untrained civilian would have WS and BS of 1 or 2. Conscripts have 2. Trained soldiers have 3 WS and BS. Veteran troops and Space Marines would have 4s, and the "uttermost elite" like Sanguinary Guard or Space Marine heroes can have 5 or even 6 in these stats.