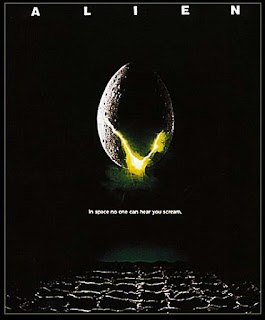 Review by: Godfrey Blackwell
Title: Alien
Director: Ridley Scott
Producer: 20th Century Fox
Starring: Sigourney Weaver, Tom Skerritt, John Hurt
Excellence: 4 stars (out of 5)
Summary in a Sentence: A terrifying and subtly themed classic of sci fi/horror; a masterpiece of filmmaking that is certainly not for the young or the faint of heart.

WARNING: I know that some younger people read this blog, so up-front I need to warn that this film is rated R and should only be viewed by adults.

May the 26th of this year will mark the 40th anniversary of the release of Alien, the all-time classic sci-fi/horror film, and this will be marked on April 26th by the release of a new 4K Blu Ray on "Alien Day". I therefore thought it fitting to (for the first time ever) write a review of this film that has fascinated me for decades. The film has apparently fascinated many, as it is said to be the film most studied by academia.

The film was not originally intended to be so deep and thought-provoking; 20th Century Fox was just looking for a way to cash-in on the success of Star Wars and happened upon a script that had been around some time. The film is quite simply summarized as the tale of a group of "space truckers" hauling goods back to earth who are re-routed to investigate a suspected distress signal. Investigation of this signal leads to an alien being brought aboard which sets about killing-off the crew one-by-one while they in turn try to destroy it.

On its face this is a rather simple story-line and I have often thought that it could have easily been trash, but instead it is one of the great classic science fiction films thanks to comprehensive world-building, exceptional camera-work and atmosphere, memorable characters, a deeply resonant musical score, impeccable set design, and a patient "slow burn" pace that draws the viewer right into the film.

I mention that patient plot ... some viewers might, with some justice, say that "nothing happens" for the first 40 minutes of the film and, admittedly, not a lot happens aside from setting the stage for the action and terror that is to come. The first time I saw the film I actually thought it a bit boring. But after many viewings I now consider those first 40 minutes among the finest in film. It really sets the atmosphere and tone, makes the viewer care about the characters, and perfectly builds tension and "sets the table" for all the action which is made 100x more potent by that "preamble".

The atmosphere/set design/world-building is one of the parts of Alien I have loved most over the years. Better than any other film I can think of, the Commercial Star Ship Nostromo feels like a real place and the characters feel real ... mostly because the ship is very well-worn (in fact it seems a bit junky) with lots of evidence of being "lived in". There is also a tremendous attention to detail, down to crew and national patches on the crew's flight uniforms, and a custom set of "standard semiotic" pictograms as labels of places and things throughout the ship -- all of which contribute to the feeling of "immersion" in a real world.

It is worth noting that another thing that makes the film so masterful is that despite having a reputation for being gruesome and violent -- with the exception of one very memorable scene -- there is actually almost no violence whatsoever on-screen. The eponymous alien itself is only partially glimpsed for split seconds and the viewer doesn't get a decent look at it until late in the film. You never actually see what it does to the characters and this actually makes the film more terrifying, in the tradition of Alfred Hitchcock who also showed almost nothing -- and let the viewer's mind create more horrifying images than anything shown on-screen. This is MUCH better than the "cheap thrills" of many movies that use gore and surprises that make you jump instead.

Apparently one of the reasons the film was rated R in the UK was because censors saw it as presenting a "perverse view" of reproduction. I had always taken the alien creature to be in the nature of a parasite "infecting" its host rather than as "impregnating"/reproducing per se. That said, as an adult studying the film further, I understand that there is certainly intended to be such an undercurrent and this would explain the reason the film has always been "disturbing in a non-specific way" (to quote the aforementioned censors). That said, given the destruction wrought by the alien creature, I am satisfied that if the film has any message beyond making the viewer terrified on this score, it is that unnatural or perverse reproductive practices/attempts result in destruction which I believe to be true.

Finally, the film is considered "feminist" by many because of the role Sigourney Weaver's character takes on towards the end of the movie. However, I think that if the film were made today it would be condemned as "misogynistic" because Warrant Officer Ripley is not the super-powered better-than-all-the-men-at-everything female lead that is de rigeur (or even mandatory) today. I actually find the film to be rather anti-feminist since it is Ripley's female vulnerability that is used to ramp up the terror of the film since she can (and does) cry, sob, scream, and flee in terror the way a male protagonist cannot. That said, it's true that as a "reactionary" I'm not a fan of sending women into deep space, but I recognize this film does not take place in a Catholic or "conservative" setting.
Posted by Godfrey Blackwell at 06:00