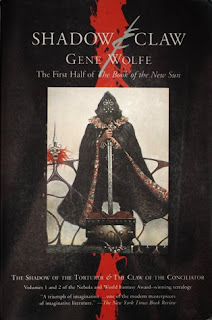 Title: The Book of the New Sun: Shadow and Claw
Authors: Gene Wolfe
Publisher: Bantam
Godfrey's Rating: 4 stars (out of 5)
Summary in a Sentence: Masterfully crafted, eloquent, and original first two novels following Severian, Journeyman of the Torturer's Guild, but not for the faint of heart due to adult content and "heavy" language.

Shadow and Claw is a compilation of the first two novels of The Book of the New Sun, a fantasy/sci-fi quadrology set in a far-future and post-apocalyptic earth (called "Urth" by the inhabitants). It is a very unique novel, so unique that I'd urge caution upon anyone approaching it because it will be unlike anything you've read before. Therefore, one must set aside any preconceived notions about fantasy or expectations when picking up the novel.

The novel is told from the first-person perspective of Severian, initially a novice and then a journeyman of the "Torturers' Guild". In this far-future setting this guild carries out the punishments ordered by the mysterious and remote Autarch. This in itself makes the novel unique and the main character an interesting one, who has a certain personal code of honour but has been raised from birth among a group of men who carry out brutal acts with a certain professional pride. He falls in love with one of the "clients" which leads to his fall from grace with the guild and is sent out to travel to a remote town to act as executioner as a punishment that will save the honour of the guild. Many strange and interesting episodes ensue. A very original and fully developed/realised future earth serves as a fantastic setting.

A word of warning, and a complaint I have about the book: there is some adult content in the novels and certainly they should not be read by anyone other than a mature adult. There are at least three scenes that I recall that really pushed the boundaries of propriety. Young adults should not be allowed to read the book for this reason. It may also be said that Severian is a bit too "irresistible" to women and my ability to suspend disbelief was taking a bit of a beating with the frequency at which women who've only just met him throw themselves at him. Yet on the other hand I think it offers a brutally honest portrayal of human nature -- and I say this not solely in reference to the "naughty bits" but to the behaviour of characters in general.

I have found over time that this is a novel that has really "stuck" with me and I find myself thinking about it over time leading me to re-read it at intervals. It is not for everyone, but certainly worth a try.
Posted by Godfrey Blackwell at 06:00


Well on this book I have to disagree with Godfrey. I am a big fan of science fiction as well as fantasy science fiction and Godfrey and I share similar tastes. Rarely have I ever been 'defeated' by a book. By defeated what I mean is that once I start reading I must finish it - to not finish is defeat. I appreciate the fact that some books just take longer to 'get into' and I feel I owe it to the author to finish his or her work.

I tried a couple of times with this book. Just couldn't do it. Godfrey summarises it well -- the writing is dense.

Each to his own!

Darth 'I am your father' Vader