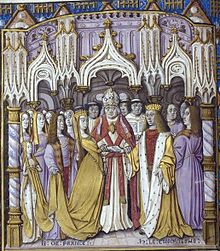 Time for some more history! A few months ago I did a post about medieval hygiene -- here's an easy "filler" post for this week: demolishing the myth that young girls under the age of ten were routinely forced to marry much older men [in the Middle Ages]. Now, it's true that according to the Catholic Church's canon law, girls were considered eligible to marry as young as 12 years old, and boys as young and 14.[1] However, this doesn’t mean that everyone was indeed married at the minimum age. We can use common sense to discern this, since even today Church law allows for marriage at these same ages, yet few marry that young. Furthermore, we’ve already disproved part of the myth since marriage to a girl under 12 was illegal and invalid.

Interestingly, finding sources that can give us any definitive answer about what age people were married at is difficult at best – although one can surmise that the Protestants and Modernists who concocted such canards as the child bride conceived of them from reading about certain isolated (and highly publicised) betrothals of royal princes and princesses at a very young age. Even then, these cases almost always involved a betrothal in childhood that was not translated into a sacramental marriage until many years later, or the couple would not consummate the marriage until adulthood. Further, both were of similar age. Such was the case of Catherine of Aragon’s betrothal to Arthur of England at ages three and two respectively, but they were not married until age 16. The rare cases where a young girl was married to a much older man, such as Isabelle d'Angoulême’s marriage at age thirteen to King John of England (aged 33) in a.D. 1200, received much attention and remained in people’s memories precisely because they were unique occasions of scandal.


Of course, royalty were a very small percentage of the medieval population and it is more useful to see when the average person married. Looking again at The Ties that Bound: Peasant Families in Medieval England by Barbara A. Hanawalt, we see that wills, manorial court records, poll tax lists, and parish registers all fail to give ages.[2] We must therefore look to “circumstantial” evidence drawn from cultural attitudes reflected in the primary sources.

All in all, these sources, which include those mentioned above, as well as literature, hagiographies, descriptions of domains and synodal statutes, indicate that people married at roughly the same age, and at a relatively mature age.[3] Of course, “relatively mature” depends on the culture we are looking at, and we should keep in mind that people in the Middle Ages started work quite young, with many boys entering apprenticeship at seven.[4]

Looking to more specifics, we see that in 14th century England, at least, teenagers were considered too young to marry, as reflected by the fact that in rape cases, men whose victims were teenagers were singled out as especially reprehensible by the prosecutors.[5] This reveals an attitude that girls in their teens should be sheltered from sexual encounters.

It’s also noteworthy, that the age of inheritance was twenty-one, which means that a young man could receive no money from his parents until that age.[6] Moralists of the time such as Robert Mannyng (1275-1338), a Gilbertine Monk and historiographer, considered the marriage of children an outrageous sin. Even the artists of the time wrote in ballads stories of special and tragic circumstances surrounding the taking of a young bride. [7]

All of the foregoing would suggest that most people were married in their early twenties, which is not much different than today (at least among those who don’t live in public sin before marriage). A survey of familial literature (ricordanz) of mercantile “bourgeoisie” from the Tuscany region of modern-day Italy between 1340 and 1530 shows some 136 first-time brides with an average age of 17.2 years married to husbands averaging 18 years old.[8]