Book Review: A Canticle for Leibowitz 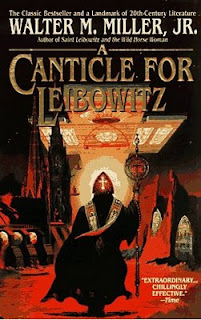 Title: A Canticle for Leibowitz
Author: Walter M. Miller, Jr.
Publisher: Spectra Books
Rating: 4.5 stars (out of 5)
Summary in a Sentence: A classic of science fiction and Catholic literature which gives a chillingly realistic portrayal of Catholic monks toiling in the Lord's vineyard in the wake of atomic apocalypse.

I must say the first thing that surprised me was all the overt and orthodox Catholicism. Written in 1959, the book portrays a future Church that is totally traditional, and is told from the perspective of members of The Order of St. Leibowitz,  monks who live according to the Cistercian Rule.

The novel is actually a collection of three novellas, each taking place several centuries apart, each following the same dystopic future setting. The dystopia comes from a global nuclear war that took place some time in the mid-late 20th century, with the first novella taking place some 600 years later in a period of darkness and barbarism. In that time, the Church is (as it was c. 500 a.D.) the last stronghold of learning and knowledge.

I have to say that I enjoyed the first novella, which followed Brother Francis of Utah, a novice seeking his vocation in the Order who plays a key role in the canonisation of St. Leibowitz, and the third novella, which follows Abbot Zerchi, leader of the order in the next time of troubles, the most. The middle novella wasn't as masterful as the first and last, in my view, though it was still good.

One thing that impressed me about Miller's writing style was how he was able to portray traditionally Catholic life in a monastery, including prayers in Latin and the like, without coming across as preaching. At least, I didn't find it preachy, but the book sold over 750,000 copies so I think that many others had my impression of "non-preachiness" while immersing the reader in total Catholicism. This is a technique that I continue to struggle with in my own writing.

Perhaps part of the non-preachy tone of the book comes from the excellent characters that play central roles in the piece. They are all very human, with faults and strong points, yet their faults never give an impression of hypocrisy in their devotion and the confessional scenes were very well done. I loved the fact that all the characters in this book were believable, devoted Catholics who I could really relate to despite their monastic state versus my lay state.

Not only were the characters very strong, but the plot was quite well done. I made the mistake of reading the forward to the novel which totally gave away some of the main plot elements (which I am being careful not to do here), yet I still found the book highly enjoyable with a few unexpected twists. The portrayal of a post-nuclear holocaust world was chillingly believable. The depictions of the Church were very well done and traditional, with some well-concieved thoughts on what sorts of issues She might be wrestling with in the wake of a nuclear war and all that it brings. I thought it was a little Americo-centric to think that the papacy would relocate to the United States if Rome were annihilated in nuclear fire, but this didn't take away from the novel.

All in all, I can't really say enough good about this novel, which truly is a masterpiece. It is excellent science fiction with all the right elements of suspense, mystery, strong characters, and new societies.
Posted by Godfrey Blackwell at 06:00

I very much enjoyed the book myself, and I think I may agree that the first and third were the best of the book; although the second is also quite good. There's so much that could be said of this work. One of the things that really struck me is the forgetfulness of the past and how this comes back to haunt humanity in this book. Its that idea we have in reality about know your past, to help with the future, and we see the error that is made in the book being carried out in real life with the left continually moving closer and closer to socialism...

Another scene that quite struck me is when the superior (I forget his name) in the last book tries to save the one lady's baby. We have already seen this battle begun in our own days of course with abortion, but as in the book, this glamorization of assisted suicide to avoid pain and suffering.

Of course the beauty of the book lies in Catholicism and to see the monks in each of these different ages adhering to the truth - such a beautiful thing. The one thing that confused be a bit was the 2nd head on that one women in the third book...

All in all, it is an amazing book!

Thanks for reading and commenting. And yes, there is indeed much more that can be said and the theme of the cyclic nature of history due to not learning from the past is definitely an important and powerful one in this book. I admittedly wrote this review some time ago, and your comments remind me that I really MUST re-read this novel again very soon.

I'm really glad I found this blog! So many great things on here. Your blog inspired me to try to finish this book again, and I did. It's now one of my favorite books, so I owe you a huge thanks. I also thought your review of "Ad Astra" hit the nail on the head. I tried listening to "The Mote in God's Eye" but just found it didn't move as smoothly as books like this do and I gave up on it after getting about 10% into it.

I stopped playing 40k a little after COVID started and sold my stuff to better focus on my duties of state, but I'm still in love with the 40k universe and books, even though I think that many traditional Catholics would, unfortunately, see the books are childish or even blasphemous. I think they have a strong traditional Catholic "sense" to them even though the books need to be read with caution. I don't know if you have read any of the Horus Heresy series, but it's hard to believe the authors of that aren't traditional Catholics, there are many parallels with Church history (modern and ancient). I think your blog proves that there is a place for Sci-Fi in a traditionalist's life if one keeps his principles in check. Please keep up this blog, everything here is great in particular your movie and book reviews. God bless you and your family!

Thank you for your kind comments, Murrax, and glad to read that you are enjoying our blog. Please check out the short stories tag to find lots of original science fiction and fantasy works written by Catholics.

I have not read any of the Horus Heresy books, but I may give one or two a try based on what you have said. I have also enjoyed the Eisenhorn books and the themes of morality, sin, an redemption in them makes me really wonder about Dan Abnett (who is otherwise totally not Catholic, however).

We are always trying to expand our readership (which is tiny) so always good to know where we get new readers from. I take it you found us through looking for reviews?

Yes! I found you through I believe your Mote in God's Eye review. I am actually reading one of Abnett's Eisenhorn books now. I have heard some of his stuff has leftist/modernist/postmodernist terms and ideas in it, but he is one of the few authors that I can say that I have loved everything I have read from him. Indeed, check out Abnett's "Horus Rising" in the Horus Heresy series if you want to plunge into it. I will definitely read the short stories on here! We need more Catholic writers today!

It would be hard to find something written nowadays that doesn't have something leftist/modernist/postmodern in it ... I have to work hard to make sure there's none in my own works and even so worry there could be subtle liberalisms given my upbringing.