For our first battle, we wanted to use models that are either complete or nearly complete. We had to house-rule a bit since we don't have the vehicles ready to make a legal German force. The Germans brought a "Mixed Panzer Company" but only one platoon since that all we have, so there's a Company Commander in PzKpfw IV Ausf H (on the left) plus a three-strong platoon of the same tanks. The German force was commanded by ALBERT. 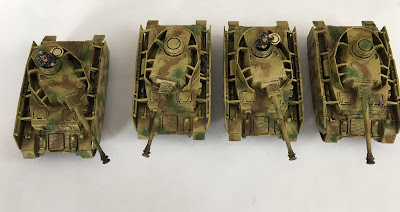 For the Soviets, we brought a "Mixed Tank Battalion" with a KV-1 Company of three tanks (bottom right), a T-34 company of three (bottom left), and a tank hunter platoon of four 76 mm Anti Tank guns. The AT guns haven't been based yet because we haven't received the flock and static grass we ordered yet. The Soviet force was commanded by JAMES. 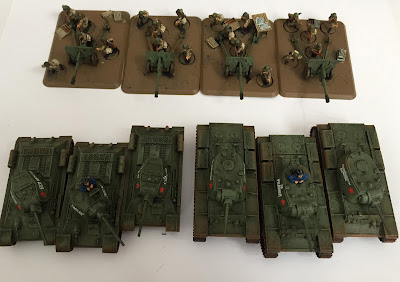 Here is the initial setup: the Germans deployed in the woods at the top of the map, with the PzKfw IV platoon to the left and the Company commander's tank to the right. The Soviets deployed in a line with the 76 mm anti tank guns to the left, the KV-1s in the centre, and T-34s to the right.

To the right is a little bombed-out German village with several houses and craters at a crossroads. To the left is a river and a ruined factory across the river. 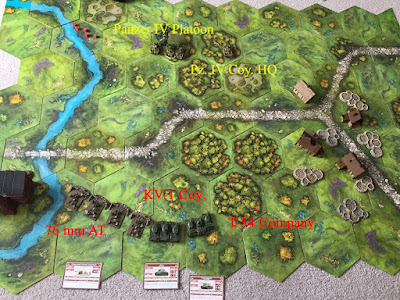 The Soviet forces all moved forward, with the much quicker T-34s passing their cross check and moving tactically through the forest. The Soviet gunners were unable to hit the German tanks, however, who were concealed in trees and over 16" away requiring 6+ to hit. 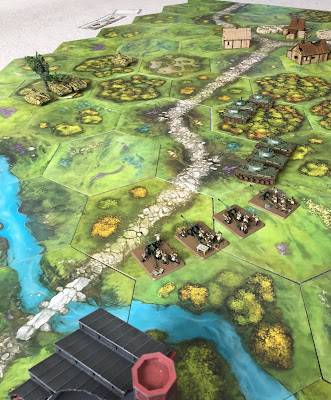 The Germans made use of "blitz"  orders on their turn to get better firing positions and destroy one T-34 and bail out another, then using "shoot and scoot" the Pz. Kpfw. IV platoon backed out of view behind the forest (the company commander failed his orders check). 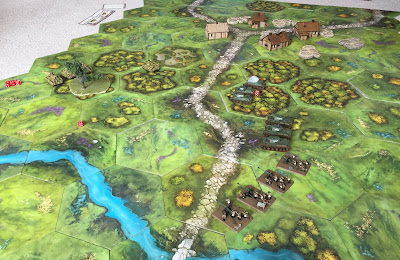 The one remaining T-34 crew decided they had had enough and, notwithstanding "Not One Step Back" fled the battle (failed last stand check) and were duly executed for cowardice by the commissars (technically the battle should have ended here since the Soviet Force only had one unit left in their formation, meaning failed Formation Last Stand, but we house-ruled it given the small forces). The KV-1 company pressed forward and were able to destroy the German Company Commander. The Germans in their turn blitzed out again and were unable to beat the KV-1 heavy armour, then "shoot and scoot"-ed back behind the forest. 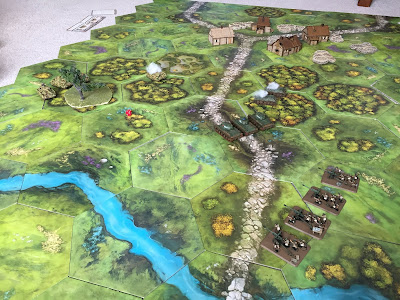 Pretty much a repeat of turn 2, with the KV-1 moving forward again and the 76 mm anti tank guns being forced to reposition as the remaining Germans were now out of range. The Germans managed to bail-out one KV-1. 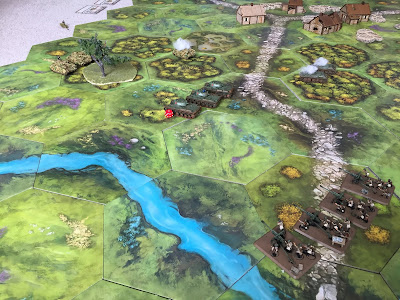 The Soviets continued to close-in but were unable to hit the PzKpfw IV through the trees. On his turn, Albert decided that his static tact was not working and he needed to reposition to make use of the Panzers' speed and greater range vs. the Soviet cannon. Instead of shooting, his platoon therefore made a cross-country dashed and then did a "follow me" order in an attempt to get into new cover behind the village log cabins. 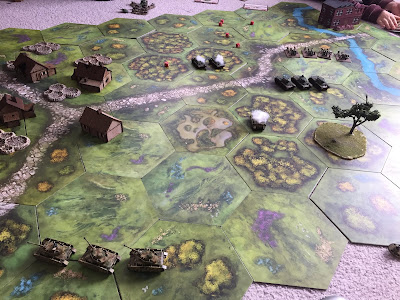 Albert had taken a calculated risk, exposing his PzKpfw IVs' weak side/rear armour to the Soviets in favour of moving as fast as possible. Fortunately, given the long range and some poor rolls, James' KV-1s were unable to do any damage, while the 76 mm slowly tried to reposition (soft skin transports would have been nice). On the German turn, the Panzers were able to get in amongst the buildings, although with a failed "follow me" the commander ended up ahead of his troops. 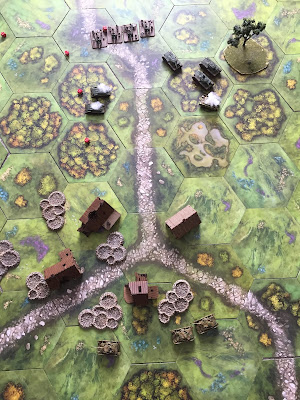 The KV-1s trundled along, trying to get into position, with one of them getting bogged-down in the woods. Their fire was once again, ineffective given the long range and the concealment behind the buildings the Panzers enjoyed. 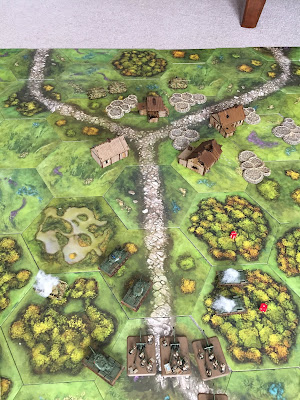 On Albert's turn, he moved his platoon commander to within command distance of the other two tanks, who moved around for a side shot. Despite only one shot apiece, they each hit, and each penetrated the KV-1 heavy side armour (a pair of 2's rolled by James on his armour save). Two KV-1s down. 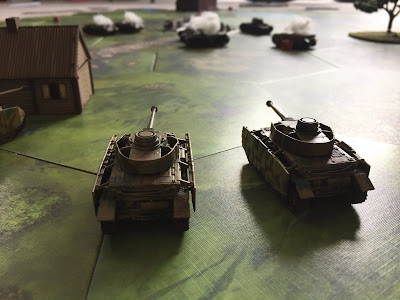 Another "Last Stand" check failure for James, and the remaining Soviet forces fled the field. Victory to the Germans! 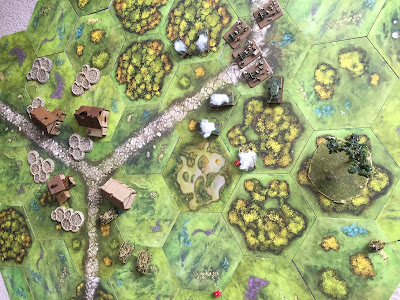 Post battle thoughts: The Flames of War rules are quite fun and make for a fairly quick game. They are straightforward and streamlined. Some people hate the unit cards because they "clutter" up the game space, but at least for us new players the quick reference helped speed things up. We found that the game was a lot more intense for the Germans who had to be very careful and crafty whereas the Soviets are more like a sledge hammer -- a nice historical feel. We're looking forward to doing games with more proper forces next time (the German army in this game was actually illegal and the Soviet one far from optimized).