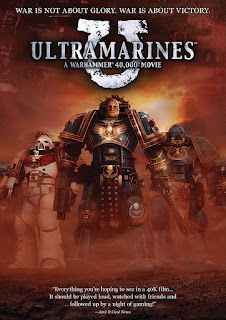 Title: Ultramarines: A Warhammer 40,000 Movie
Director: James Mather and Stephen St. Leger
Distributor: 20th Century Fox
Starring: Terence Stamp, John Hurt, Sean Pertwee
Excellence: 2.5 stars (out of 5)
Rating: R; I am really not sure why this film is rated R, I think that teenage boys can watch it fine; there is some science fiction violence of guys in big metal suits shooting at each other or fighting demons with chainsaw-swords, but no profanity or "adult subject matter" at all.
Summary in a Sentence: An enjoyable venture into the "grim darkness of the far future" where power-armoured space marines fight demons.

As a testament to how ridiculously "time flies", this film is almost a decade old, and given its age I would probably not bother with a review but for the fact that (a) it's the only official Warhammer 40,000 movie produced thus far (and we are fans of 40k) and (b) there's been so little in theatres that piqued my interest, I've not seen a new science fiction film since Interstellar!

I give the film 2.5 stars ... it's not great, but it's far from awful. Fans of Warhammer 40,000 are deeply divided over the film and it generally did poorly which is why I think Games Workshop has not made further attempts. But I thought it had some interesting characters and some good action, and lots of cool very 40k stuff like the skull-helmeted chaplain shouting "burn heretics" as he takes down a group of Chaos Marines (basically devil worshipping bad-guys in the 40k universe).

The film is very short, at barely over an hour long, so it felt more like an episode of a TV show than a movie. As a TV series it's something I'd watch again and I find this film to be pleasurable enough to watch ever once in a while when I was a pure "popcorn" type of film that is not deep but has a decent basic adventure story and some demon-fighting action.

Posted by Godfrey Blackwell at 07:00