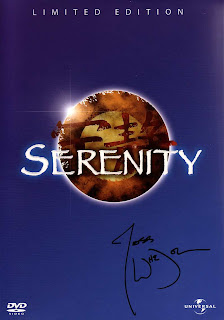 Title: Serenity
Director and Writer: Joss Whedon
Producer: Universal Studios
Starring: Nathan Fillion, Chiwetel Ejiofor, Gina Torres, and Summer Glau
Godgrey's Rating: 4.5 stars (out of 5)
Rating: PG-13; I'd say this rating is fairly appropriate and would not let my children see it until at least 13, perhaps a little older due to some intense sequences and mature subject matter.
Summary in a Sentence: A fantastic space opera with strong anti-utopian themes, interesting characters, and lots of action.

This film came out in 2005, so by 2019 it's considered "an oldie but a goodie" and in my view well worth revisiting as one of Dad's favourites (although it still has some mature themes so none of the younger contributors to this blog have seen it yet). It is a space opera, but not just any space opera. It is the best in the genre I've ever seen, combining everything that made the original Star Wars movies better than the "prequels", but with modern special effects and better actors and characters.

First, a quick plot synopsis from the Internet Movie Database:


The crew of Serenity will take any job, even if that job isn't exactly legal. Captain Malcolm Reynolds (Nathan Fillion) and his crew take small smuggling and robbery jobs to keep their ship afloat, and to stay under the radar of The Alliance, the galactic conglomerate that not only rules the galaxy, but was on the opposite side of the war Mal lost years ago. But when Simon (Sean Maher) and his unstable, telepathic sister, River (Summer Glau) join the crew, they get in much more trouble than they bargained for. A government operative (Chiwetel Ejiofor) is after River, because she stumbled onto a secret no one was supposed to know... and the alliance will do anything to get her back.

At the time I first saw this film I had never seen the TV series "Firefly", but I was not lost at all in this film and enjoyed it immensely. I have since acquired the series and consider it highly worthwhile but in no way necessary to an appreciation of Serenity. In fact, it is the only movie in years (save the Lord of the Rings Trilogy) that I thought was worth seeing more than once in the theatre, and my wife and I in fact watched it three times.

I really can't say enough about how enjoyable this film is to watch. Suprisingly, it did quite poorly at the box office and was on the big screen for a few short weeks only (or maybe not surprising -- many of my favourite films tanked at the box office). I'm not sure why it was so unpopular, because despite the anti-utopian themes that I alluded to at the very beginning of this review, it had all the things that one would expect to make a blockbuster: good characters, good storyline, good special effects, good action.

The overarching theme of the film is more Catholic than I'm sure the writer could imagine. This manifests itself in the following ways:


Now, it definitely has some modernist elements to it and I'm 99% sure the writer/director Joss Whedon is an atheist and it shows, but overall, it's much better than the vast majority of Hollywood films in terms of the messages it tries to convey.

I'll try to sum up quickly the other things that I loved about this film: the special effects sequences were nicely understated (unlike the recent Star Wars movies which sometimes felt like watching someone else play a video game) and when they did appear they were done very well. All of the action sequences were meaningful to the plot. The characters were very realistic and engaging.

As one review I read stated: "for those looking for an original and thrilling movie experience, this will shock and amaze." I think I felt walking away from Serenity a little of what people from a previous generation felt walking out of Star Wars the first time in 1977. Even if you aren't a science fiction fan, put this on your list of movies to watch.

Posted by Godfrey Blackwell at 11:37