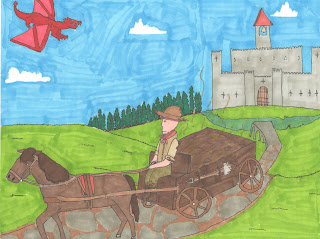 By Anna Blackwell (November, 2020 - age 13)
Once upon a time in a the kingdom of Londolum, during the peaceful reign of good king Jake, there lived a gong farmer named Giles Furney.

He was known through out the land, and almost every ear was alert to the sound of his squeaky cart. But it must be noted that in more far away kingdoms, Giles Furney was simple known as the gong farmer. He was however very much respected through out the land, and was never called mean things like stinker or He-who’s-cart-smells or farmer-got-stinky (though some naughty children were fond of these names). There was one thing however that every one must know about Giles Furney, it was that he took his job very seriously (even though he first day of work was a complete disaster) he never paid much attention to any one else’s business and it was not uncommon for him not to here the latest news.

It even is said that during the reign of Wise King Job when he was fighting off of the neighbouring enemy land, that Giles knew not of it and only carried on with his work. King Job took this as a advantage and making sure the moat got extra full ( I will not mention how he made sure that happened) till Giles had no choice but to fill his cart, which was pulled by a run down, mud-coloured mule, and make off to the dumps. But Wise King Job told Giles to empty it out in the dumps were the enemy army was close to. Not knowing of the rivalry that was going on Giles went off at the king's bidding. Even though he got quite near the enemy lines, they got no nearer to him. They smelled his stinking cart miles away and retreated back. No blood was shed that day or the next, King Job only sent Giles farther and farther into enemy territory until they had enough of avoiding Giles and his evil-smelling cart, and sent as fast as they could a peace treaty. And with that the war ended and Giles had no idea what a great deal of help he had just done to the inter kingdom.

But now let us return to the present. Everything was well, the fields were flourishing, robbers and bandits were being hunted out of there layers, the woods were plentiful with wild animals, the people were happy and so was the king, Giles was being paid well and wasn’t fussing about the unusual amount of guest visiting the castle so you might say everything was set fair. Until the dragon came.

Up high in the far away mountains there lived a skinny but still large red dragon, he had gotten rather tried of his small liar of cold gold mixed in with few rare gems and pearls. And also he was getting tired of the rough mountain goat meat, they were getting scarce anyway, he longed for sweater meats and most of all more treasure to fill his dreary cave with.

Oh! The thought of gold made him shake with greed. Now it had not been too long when a distant cousin had pasted by and told of the land of Londolum and how there were fat sheep and cows scattered on every field, and lots of wealth in the lands.

The dragon (Tumult his name was) had almost gone out of his mind now feasting on the thoughts of wealth and meat. So beginning a very unheeding dragon, not thinking once about knights or brave men who slew dragons, opened his wings and flew off to the lands afar.

You can imagine the damage he did, crops were flattened, dozens of sheep, cows and horses were devoured, the towns were crushed, the people of the land had to rush the archbishop of TrotBerry to safety and save the Duke of Bold from Tumult.

Many people were rushing to King Job’s castle, StowerHold, for protection, but did Giles know of the threat? NO! Heavens no! He had far too much work now that the castle was filled to the brim and not to forget the moat with muck! It wasn’t too soon when Giles had to fill up his cart and head of to the dump mumbling “ Good nigh what a stink the dwarves always leave behind!”

The people from he castle watched in horror “The fool! Doesn’t he realise the dragon is near! He will be eaten!”

Many people begged King Job to send out his knights, but he knew he couldn’t risk his knights for one man (and I am not so sure how much the knight might have wanted to got out any way)

Now the dragon of course was very near. Hovering just a little far off from the castle. But suddenly the dragon noticed some thing.

“Smoked fish! What a horrid smell!” He gasped. He ( the dragon) looked down to see Giles and his stinking cart. The dragon began to dive down to devour Giles but the smell got even worse.

Giles however only saw the shadow of the dragon and mistook it for a crow.

“Ah, rotten scavenger, ugh, I’ll show him.” He muttered not even looking up but stopping his mule to turn around and get his shovel. “Ok, let’s see here," hHe said as if studying carefully before filling his shovel with muck to throw at what he thought was a crow.

He got ready to throw but he suddenly fell off balance and slipped just as he threw.

“Oh my goodness! I mean..aaarrggghhhhh.” he shouted as he fell, muck flying every were.

The dragon roared as the muck hit its mark “Yuck!What is it?” The dragon cried. “I’m not coming back to this stinky place again no matter how many sheep and cows there are!”

Giles was just as lucky as the dragon: muck had landed on his nice leather hat and on the road, but just then shouts and cheers arose from the people in the castle “Hooray now he will go home and die and it will serve him right!” they cheered. The dragon had taken flight and the kingdom was safe.

On that day a great feast was held in Giles' honour, that night was later in history known as the night of a thousand fireworks. Giles was paid given a large amount of money for his erm….gallantry or pluck as it was known later on.

So as it is certain, the dragon never came back, the kingdom flourished again, gong farmer Giles continued being a gong farmer, even though he was quite wealthy now and not that any one minded, in fact many thought that no one could replace him (not that any one would, well not any time soon)

So with that we might as well say they all lived happily ever after.