Book Review: The Coming of Conan the Cimmerian 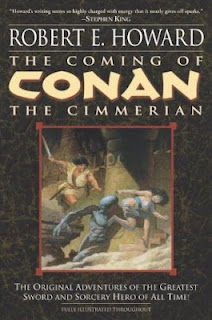 Title: The Coming of Conan the Cimmerian
Author: Robert E. Howard
Publisher: Del Rey
Godfrey's Rating: 3 stars
Summary in a Sentence: A compilation of all the Robert E. Howard Conan stories, this collection is a classic that not just defined but created the "swords and sorcery" genre; Howard's bold style and somewhat purple prose make for good clean fun well-worth the modern reader's attention.

I picked-up the Kindle version of this book a few months back after Sophia's Favourite mentioned on his blog that he considered the Conan stories "good clean fun".  On the whole, I agree with the assessment and considered this collection a good read. Being an older work, you can get it for a fairly decent price as well, although unfortunately the version I got (which was only $0.99) is no longer available on Amazon.

When I say "good clean fun", there's quite a bit of violence with descriptions of brains splattering in the tradition of the Roman classics and Medieval chansons de geste, and while there are a fair number of scantily-clad ladies Conan is rather gentlemanly in his conduct with them, at least "on-screen". The stories are uncomplicated, pure action/adventure, so you should take them for what they are. These are to be read for fun and relaxation. One complaint I had, and which brings the collection down to a 3 where it might have been higher, is that the stories get a little repetitive after a while. There's definitely a formula to them, and while Howard does a pretty good job of mixing this up,  there's only so much variety available. I found the same with Edgar Rice Burroughs' Mars books.

But these stories are certainly better than most of what passes for fantasy fiction today. Aside from creating the "swords and sorcery" subgenre, this collection also features one of the seminal "anti-heroes". Conan is not just a barbarian, but a mercenary, brigand, and thief. He lives for the thrill of battle, the taste of wine and good meat, and the embrace of a woman. For all that, he does have a certain honour and decency which especially comes out when he is placed in positions of authority or when a vulnerable young woman is in his power. So he's certainly a palatable "anti-hero" although he seemed to have a bit of the "noble savage" about him which is a trope I've never been a fan of.

On the whole, the collection deserves a solid 3 stars and I recommend that any fan of fantasy in general and swords and sorcery in particular, read it.